Ärtze Zeitung, the German newspaper for doctors, has a loving, long appreciation of the Ig Nobel Prizes. It begins [here translated into English]:

Winking and improving the world

The research results, for which the Ig Nobel Prize is awarded annually, often tease the laughing muscles – and then make you think. Many results are now available in the collective memory. An overview of what has been awarded so far…. 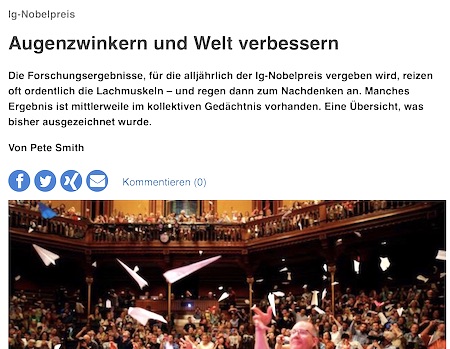 The essay finishes with this:

… The sophistication of the decisions of the Ig Nobel Prize Committee illustrates hardly any work better than the study “From junior to senior Pinocchio” by the Belgian psychologist Evelyne Debey and colleagues, who did not receive the award alone, 1000 liars according to their frequency To have questioned lying, but above all their willingness to “believe their answers”.

Some of Cambridge’s acknowledged findings are now anchored in the collective consciousness. These include insights into Murphy’s Law (1996 and 2003), the exposition of the Dunning Kruger Effect, which states that the difficulty of perceiving one’s own incompetence leads to exaggerated self-assessment (2000), and the related phenomenon that people who believe to be drunk, also believe that they are particularly attractive (2013).

On April 12, 2019, German doctors—and anyone else who is in Berlin that night—will be able to explore firsthand the world of the Ig Nobel Prizes, at the Ig Nobel Night in Berlin event at Tempodrom Berlin. Tickets are available online.