Marc Abrahams writes about things that are surprising—so surprising that they make people LAUGH, then THINK.

IG NOBEL PRIZES: Marc founded the Ig Nobel Prize Ceremony in 1991, and serves as master of ceremonies. The prizes are handed out by genuine, bemused Nobel laureates in a gala event held every year at Harvard University, and broadcast on the web and on public radio. (The 1995 ceremony was one of the very first events ever webcast.)

WRITING and EDITING: He co-founded and edits the magazine Annals of Improbable Research (AIR), and wrote This is Improbable, The Ig Nobel Prizes, and other books. He edits and writes much of the web site and blog www.improbablecom.wpcomstaging.com, and the monthly newsletter mini-AIR. For thirteen years, he also wrote a newspaper column (called “Improbable Research”) for The Guardian. He created and hosts the Improbable Research podcast. Earlier, Marc was editor of the magazine Journal of Irreproducible Results. Marc is also co-author, with entomologist Jiri Hulcr, of the biology book The Surprising Lives of Bark Beetles: Mighty Foresters of the Insect World (published in September 2022)

If you’re wondering how someone ends up doing this kind of, uh, work, read this little essay, from some years ago, in The Guardian.

Le Monde called Marc “The Pope of improbable science.” The Washington Post called him “the nation’s guru of academic grunge.” The Journal of the American Medical Association called him “the Puck of Science.” He has been called many other things. The Guardian said Marc’s writing is “rationalism taken to intoxicating extremes“. Some profiles: 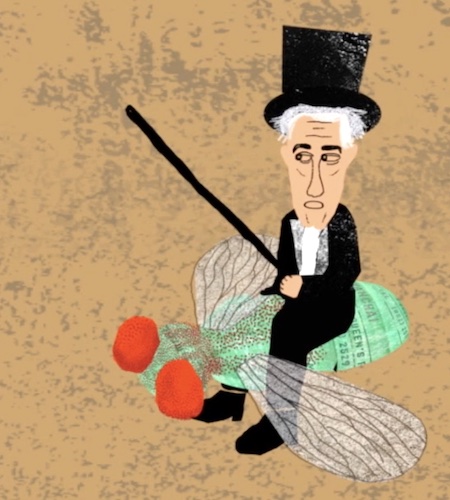 The New York Times for Kids transformed Marc into a cartoon character for its animated introduction to the 2020 Ig Nobel Prizes.

SPEAKING and EVENTS: Marc does talks and other events, drawing on his vast file of improbable research (and people) about everything that humans have devised, discovered, or desired.

Marc invented several new kinds of public events, among them the Ig Nobel Prize ceremony, Improbable Dramatic Readings, and Improbable Research talks/questions. (Some events are annual—at least in non-pandemic years. Every February, Marc hosts a special Improbable Research show at the Annual Meeting of the American Association for the Advancement of Science (AAAS). Then in March and April he leads the Ig Nobel EuroTour, performing live shows in cities across Europe.)

OPERAS: Marc has written the librettos for twenty-some-odd funny, science mini-operas that premiered as part of the Ig Nobel Prize ceremonies. These mini-operas honor the tradition of the classic Bugs Bunny cartoons “What’s Opera, Doc?” and “Rabbit of Seville”— each mini-opera is a pastiche that marries a brand new story & words to beloved old music (from operas, popular songs, etc.).

MAGAZINE COLUMNS, TV, RADIO, PODCAST: Marc also writes for other publications, on science, technology, medicine, and other topics. He is or has been a regular columnist for several magazines, including: Cómo Ves (in Mexico), The Harvard Business Review, Zeitwissen (in Germany), Le Scienze (in Italy), Etiqueta Negra (in Peru), Chemistry World, the technology magazine Embedded Systems Design, and the engineering magazine Design News, the tech-business site BetaBoston, and was the back-page humor columnist for the late, lamented computer magazine Byte. He has also been a commentator for ABC-TV’s World News Now and public radio’s “Science Friday” program, and created the Improbable Research podcast in collaboration with CBS Radio.

BOOKS: Marc wrote the books The Ig Nobel Prizes, The Man Who Cloned Himself, Why Chickens Prefer Beautiful Humans, This Is Improbable, This is Improbable Too, The Ig Nobel Cookbook, volume 1 (co-authored with Corky White and Gus Rancatore). He edited (and wrote much of) the science humor anthologies The Best of Annals of Improbable Research and Sex As a Heap of Malfunctioning Rubble (and other improbabilities). These also appear in numerous translations (of which his favorite is Der Einfluss von Erdnussbutter auf die Erdrotation). Other books are imminent.

WORKSHOPS/TALKS: Marc sometimes does workshops (at Manchester University, Harvard University, and elsewhere) for scientists. These are about the question: How do you get non-specialists to *want* to know about your work.

PRESS: Marc and several Ig Nobel Prize winners are the heroes in a manga in Young Jump Magazine, Japan’s most popular manga magazine. The Ig Nobel Prize Ceremony has also been the subject of several documentaries. (Marc explains the essence of the Ig Nobel Prizes in a PBS NewsHour Weekend interview. You might enjoy reading some other press clippings.)

BACKGROUND: From 1990-1994, Marc was the editor of the Journal of Irreproducible Results. In 1994, after the magazine’s publisher decided to abandon the magazine, the founders and entire editorial staff (1955-1994) of the Journal abandoned the publisher, and immediately created AIR. The Improbable Research editorial board of more than 50 distinguished scientists includes many Nobel Laureates, several Ig Nobel Prize winners, IQ record holder Marilyn Vos Savant, and a convicted felon. Marc described how it all began, in an essay for The Guardian.

Marc has a degree in applied mathematics from Harvard College, spent several years developing optical character recognition computer systems (including a reading machine for the blind) at Kurzweil Computer Products, and later founded Wisdom Simulators, which used computers to give people experience making tough/impossible decisions. Marc is the subject of a Harvard Business School case study called “Marc Abrahams: Annals of an Improbable Entrepreneur.” He is married to psychologist Robin Abrahams, who writes the “Miss Conduct” advice column for the Boston Globe Magazine.

At the USA Science and Engineering Festival, with an audience of high school students:

At Imperial College London, on the Ig Nobel EuroTour: