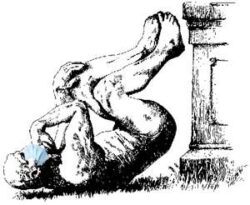 The Weiter Denken blog distilled, into about 700 words, the essence of the Ig Nobel Prizes. Here’s a machine translation, from German into English, of what they wrote:

A prize for the square from the round

Scientists always keep to themselves in the academic ivory tower? The Ig Nobel Prize proves that there is another way – a prime example of successful communication on rather demanding topics.

The Ig Nobel Prize puts research results in the spotlight that would otherwise probably never have been heard of. For example, why wombat droppings are square or how much saliva a person produces in a day. What these questions have in common is that they seem bizarre at first glance, but are highly relevant for business and progress. Those who devote themselves to such topics have, with a bit of luck, been honored in a solemn, but definitely not time-honored ceremony since 1991. A good atmosphere is created when the personified human error – a man with a target in front of his stomach – is pelted with paper airplanes and a little girl loudly (and persistently!) Calls on the winners in their acceptance speeches after exactly 60 seconds to end come. A spectacle

But it is not just this spectacle that makes the Ig Nobel Prize so successful. Because despite all the fun, its inventor, Marc Abrahams, is pursuing a serious goal: The format should offer alternative access to today’s science and draw attention to the relevance that even seemingly bizarre research can have. Making the audience laugh at it is a means to an end. Because this way the topics stay in your head in a special way – which then makes you wonder why researchers are concerned with such a topic. Why this format works so well is ultimately a communicative question. In the following we want to break down the success mechanisms.

Simplification creates understanding
In the presentation of research, the Ig Nobel Prize reduces the respective topics to their core. Hard work, as the inventor admits. Distracting detailed information about the experiments is sorted out and the central message, which we should laugh about first and then think about, stands out. For example, when a researcher like Fritz Strack is honored for refuting himself. Like him, countless psychologists feel when the results of social experiments inexplicably cannot be repeated – a complex dilemma due to the interplay of countless factors. The focus on the bare end result, however, allows people who are not specialists to grasp and understand the complex problem.

Shortening prevents excessive demands
At the same time, this reduction shortens the topics presented so that they are not only easy to understand but also quick. In this way, research that otherwise fills entire books is made accessible to the masses without overloading it with too much information – for example, by reducing the replication dilemma of psychology to a ballad that can be performed in just 60 seconds. Because in a time when people seem to be chronically short of time, it is essential to get to the point quickly.

Show value generates attention
It is also important to generate interest and attention. With the Ig Nobel Prize, this succeeds almost automatically by setting unique themes and the wonderfully eccentric traditions (such as throwing paper planes). The fact that real Nobel Prize winners regularly present the Ig Nobel Prize provides additional impetus and at the same time ennobles the event. This recognition of the award by the academic community shows that this is not a mocking display of unusual research, but a new format for presenting serious science.

Humor makes topics more accessible
With the winking celebration of science in all its facets – the successful and sometimes also the failed – the Ig Nobel Prize makes topics palatable to laypeople that they might otherwise avoid. Because humor offers information packed in entertainment. That hits the nerve of scientists and laypeople alike. The result is a new communication format that multiplies by itself – in that the media and communication professionals worldwide report on it.

The Ig Nobel Prize is thus a successful piece of (science) communication, from which we can certainly cut off one or the other slice of inspiration for our daily work.