Olga Shishkov will discuss (and maybe demonstrate?) how a swarm of maggots eats a pizza, next Saturday night, February 16, at the Improbable Research session at the AAAS Annual Meeting, in Washington, DC. 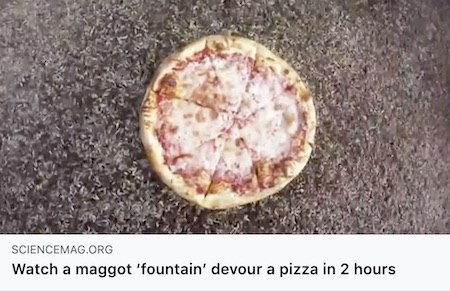 Science magazine introduces the research: “If you’ve got the stomach for it, you can watch 10,000 maggots demolish the above pizza in 2 hours. Now, scientists have a better sense of how these fly larvae gobble food so quickly, a possible boon for sustainable food production.”

Details are in the newly published study:

A single larva is shown in figure 1a. Figure 1b and electronic supplementary material, video S1, show a swarm of larvae consuming a 16-inch pizza in 2 h.

David Hu, co-author of the new study (and leader of the lab), shared the 2015 Ig Nobel Prize for physics, for testing the biological principle that nearly all mammals empty their bladders in about 21 seconds (plus or minus 13 seconds).

Next Saturday night in Washington: Details

Here’s the lineup of speakers at next week’s Improbable Research show, in Washington:

It’s at the Omni Shoreham Hotel, in the Diplomat Ballroom, Saturday, February 16, 2019, beginning at 8 pm. This session (unlike most of the AAAS Annual Meeting) is open free to the public. Please join us there!