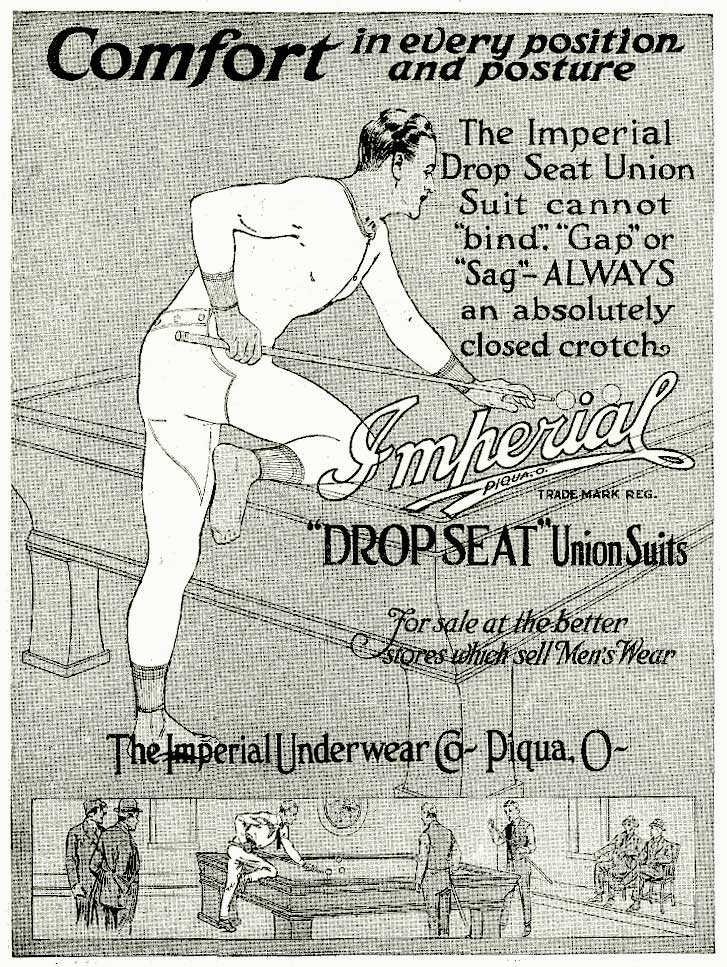 This advertisement, showing a gentleman playing billiards in his underwear, promoted the Imperial Underwear Company’s ‘DROP SEAT’ Union Suit, and appeared on page 66 of the Literary Digest, Oct 27, 1917. Approaching one hundred years later the ad. also featured in the paper ‘Considerations on a Gentleman’s Posterior’ (in : Fashion Theory: The Journal of Dress, Body & Culture, Volume 16, Number 2) authored by Shaun Cole who is the Programme Director for the Graduate School Culture and Curation Cluster at University of the Arts, London.

“A series of stylistic and practical developments in the rear openings of men’s underpants in the first quarter of the twentieth century, led to a series of advertisements that depicted men’s rear ends. It is worth noting that representing men in their underwear fell into the interstice between the fully clothed man and the male nude, raising problems around ‘masculine cultural identity, definitions of male discretion, and the engineering principles of the underwear garments vis-à-vis the human body’ (Martin 1992: 19).”

Note: Shaun Cole should not be confused with Shaun Cole, who is a professor at the Institute for Computational Cosmology, Department of Physics, Durham University, UK, and who studies (amongst other things) extragalactic astronomy.