The Science Gallery in Dublin has built a full-scale model of the Ig Nobel Prize-winning Blonsky birthing device, and placed it next to the window where passersby can admire and wonder at it: 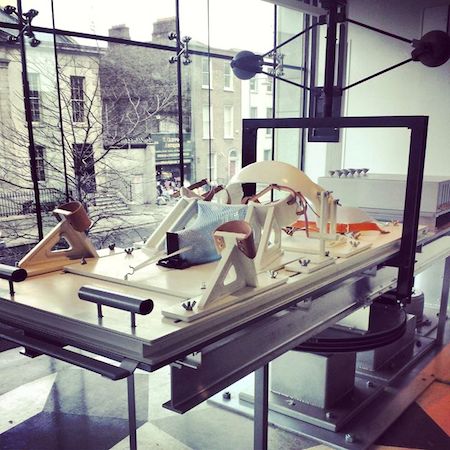 This is part of the Science Gallery’s gala “Fail Better” exhibition, which runs from February 2 through April 27, 2014. The gallery explains:

The goal of FAIL BETTER is to open up a public conversation about failure, particularly the instructive role of failure, as it relates to very different areas of human endeavour. Rather than simply celebrating failure, which can come at great human, environmental and economic cost, we want to open up a debate on the role of failure in stimulating creativity: in learning, in science, engineering and design.

The gallery also produced this lovely drawing, based on the original engineering drawings that are part of the Blonskys’ 1965 patent:

I wrote up a short description of the device and its background, placing it in the context of the exhibit:

In 1965, George and Charlotte Blonsky, a married couple living in New York City, were granted US patent #3216423 for an “Apparatus for Facilitating the Birth of a Child by Centrifugal Force”. When a woman is ready to deliver her child, she lies on her back on a circular table. She is  strapped down. The table is then rotated at high speed. The baby comes flying out. This is intended to “assist the under-equipped woman by creating a gentle, evenly distributed, properly directed, precision-controlled force, that acts in unison with and supplements her own efforts”.

Though meticulously and lovingly engineered with safety features to protect both mother and child, the device never made it into general use. Few people other than the Blonskys perceived the need for it. Their method stands rather outside most birthing traditions. Their mechanism is expensive and complex. Also, the tiny net designed to catch the child may be inadequate to the task….

Patrick Freyne of the Irish Times visited the exhibition and wrote about his experience.

If you attended the most recent (2013) Ig Nobel Prize ceremony at Harvard University, in the US, you saw the premiere of the opera we wrote and produced about the Blonskys and their invention. This video shows the entire ceremony, including all four acts of the opera:

BONUS [February 26, 2014]: An essay in Forbes magazine: “Why The Road To Success Is Paved With Failure“, partly about Ig Nobel Prize winner Andre Geim.

BONUS [March 6, 2014 — thanks to Ig Nobel winner Brad Bushman for bringing this to our attention.]: A report about the Blonsky exhibit, on PRI’s The World. And here’s video of the FAIL BETTER exhibition, including a look at the model of the Blonsky device: