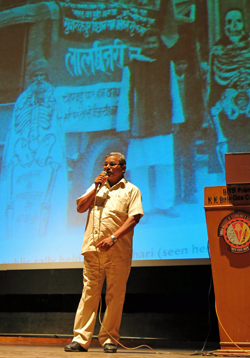 Lal Bihari ‘Mritak’ won his prize for (1) leading an active life even though he has been declared legally dead; (2) for waging a lively posthumous campaign against bureaucratic inertia and greedy relatives; and (3) for creating the Association of Dead People.

(The word ‘mritak’ means “deceased”. Lal Bihari chose to add it to his name after he discovered, those years ago, that he was officially deceased. His organization is named ‘Mritak Sangh’, which translates to ‘Association of the Dead’. Their surprisingly lively web site is called MritakSang.org.)

In 2003 – for obvious reasons – he could not travel to Harvard to collect his prize. So, during the Ig Nobel Conclave in Goa a short ceremony was scheduled to honor him and allow him to deliver his (belated) acceptance speech. Due to a lack of an effective time-measuring device, his speech took about 20 minutes (at the actual Ig Nobel ceremony at Harvard every year, each winner’s speech is limited to about one minute).

Mr. Bihari explained, among other things, that after fighting the Indian authorities for almost 20 years, he finally got his life back, but nevertheless still heads the ‘Association of Dead People’ to help others to overcome problems when they are declared officially dead. Of the approximately 20.000 people who have this problem in India, he has already helped more than 500 to get their life back. 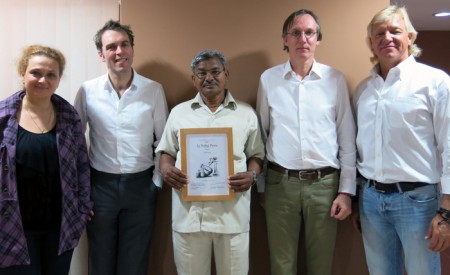