The Australasian Medical Gazette was a normal medical journal in most respects, with the addition of occasional features relevant to the unique concerns of the doctor practicing in rural Australia (or New Zealand). These ranged from advice on how to avoid being outcompeted by fraudulently subsidized Friendly Societies in the western goldfields, to the report on Dr. E. P. Vines who was killed by spear-wielding aborigines while on a house call. 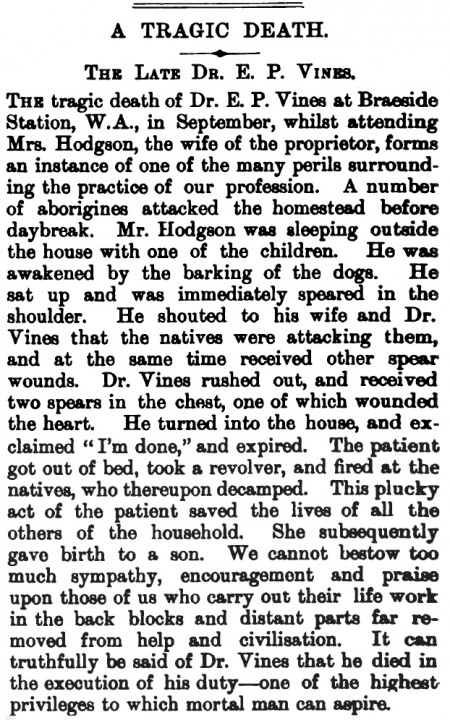 Somewhere in the middle are the tips for how proper surgical technique can be achieved in a dusty bush hospital, offered by H. Critchley Hinder in “Notes on Aseptic Surgery” (October 1899) , Volume XVIII, pages 442-447. For example:

Horsehair is best kept in stock dry, and a few strands boiled immediately before use. When first taken from the beast it is best to wash it well with soap and warm water, then boil it, dry it, and stow it away dry.

The better made, the more cleanly finished the catheter, the less does boiling affect it. The red rubber Jaques, what is known as the Belfast linen, the black French, the English gum elastic, may all be boiled, but after the boiling the catheter must be laid out perfectly straight till it cools.

The catgut, if in oil, is wiped clean, soaked in ether for twenty-four hours, then boiled in alcohol for fiteen minutes every other day three times in succession, and kept in alcohol. A stock bottle of this may be kept and the reels required for the day’s use boiled once more. If the gut be boiled six or eight times it becomes somewhat rotten.

Men living in the country in particular may readily supply themselves with excellent ligature material with very little trouble. Kangaroo and wallaby tendons may be procured without very great difficulty and prepared after this fashion: –First secure the tail, slit up the skin from end to end, then strip off the skin. Take a hook, slip it under the tendon about the centre and draw it out. Having obtained all you require soak them in water for a few hours, in order that the sheath may be slipped the more easily; place the tendons in a three per cent. solution of formalin for twelve hours, then take them out and place them in a solution of one part glycerine to eight of alcohol which has already been boiled. This may be kept as stock.

Hinder goes on to explain the finer aspects of choosing a wallaby.

Kangaroo tendons will not split up very well for fine work, but rock wallabies or some of the smaller varieties of wallaby, yield beautifully fine tendons fit for the finest work.