The Jardin d’Acclimatation in Paris’s Bois du Boulogne, now a children’s amusement park, was founded in 1860 as one of Europe’s first major zoos. In 1877 the directors followed the lead of Carl Hagenbeck and started incorporating ethnological exhibits, of humans indigenous to the strange lands being opened up by imperialism. These attracted huge crowds as well as interested anthropologists like milk expert Dr. C. A. Condereau (quoted in Scientific American in 1883).

The London Medical Times and Gazette (January 19, 1878) summarized Condereau’s findings in a paragraph that was syndicated in other journals and even translated into German.

Among the Esquimaux who are at present in the Paris Jardin d’Acclimatation is a young mother who is suckling two infants. Dr. Coudereau undertook the analysis of her milk in order to compare it with that of Europeans. He found that while it contains a smaller proportion of salts, it is richer in sugar and especially in fat. This richness in the hydrocarbons accords with the habitual regimen of the Esquimaux, who resist cold by the consumption of an enormous amount of fatty bodies. —Union Méd., January 12.

To find the original study, one has to first realize that “Coudereau” is a misspelling of “Condereau”, and then realize that the citation of L’Union Médicale only refers to another brief synopsis. The real data is in Bulletins et mémoires de la Société d’anthropologie de Paris (Vol. 12, pp. 637-639), in a paper presented December 20, 1877.

Here’s a table comparing the dry constituents of the milk of “la femme groënlandaise” and “des femmes françaises”. 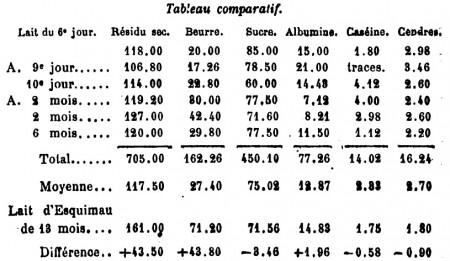