Scholarly fans of British hitmen have managed to rank the members of that profession. Hitmen in Britain, according to this study, essentially come in four varieties: Novice, Dilettente, Journeyman, and Master. Details are published in:

The dearth of academic research about hitmen is to be regretted… this exploratory article has only attempted to sketch in the broad contours of the phenomenon….

British hitmen do not exist solely or perhaps even primarily, within some secret, criminal underworld. Rather they are usually part of that community in which their hits takes place. Indeed, this simple reality is one of the major reasons why they are eventually apprehended….

Nor were all of the hits in our sample particularly professionally carried out. ‘Dilettante’ British hitmen, in particular, changed their minds; they got cold feet and could, in extreme circumstances, become the victims of their intended targets themselves. Even so, the ‘Journeyman’ hitman could be successful over a long period of time, although he was, thankfully, eventually caught….

Frankly, the motivations to pay a hitman the relatively small amount to carry out a murder were depressingly banal…. All of this is far removed from the media portrayal of the fictional hitman who, on the evidence presented here, has little, or no connection, to his British reality.

Further detail from the study: 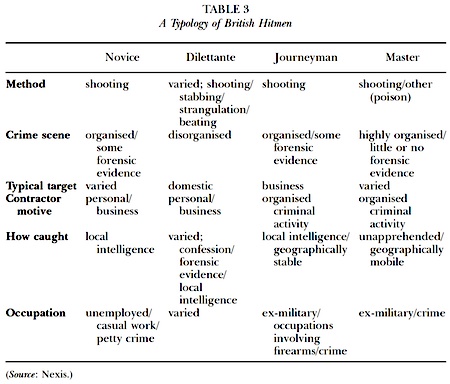 In this video, co-author David Wilson explores the concepts of mass murder and serial killing: