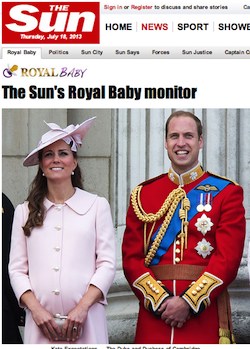 While some persons in Britain eagerly await the birth of a royal child [if you are one of those persons, see the live webcam provided by The Sun newspaper], we remind you that George and Charlotte Blonsky solved the general problem. Their patent, granted in 1965, is for a device to assist in birthing a child, by applying centrifugal force.

The Blonskys were posthumously awarded an Ig Nobel Prize for that, in 1999. The Ig Nobel citation says:

The late George and Charlotte Blonsky of New York City and San Jose, California, for inventing a device (US Patent #3,216,423) to aid women in giving birth — the woman is strapped onto a circular table, and the table is then rotated at high speed.

Here is a technical drawing from the Blonsky patent [to download a PDF of the entire patent, click on the image]: 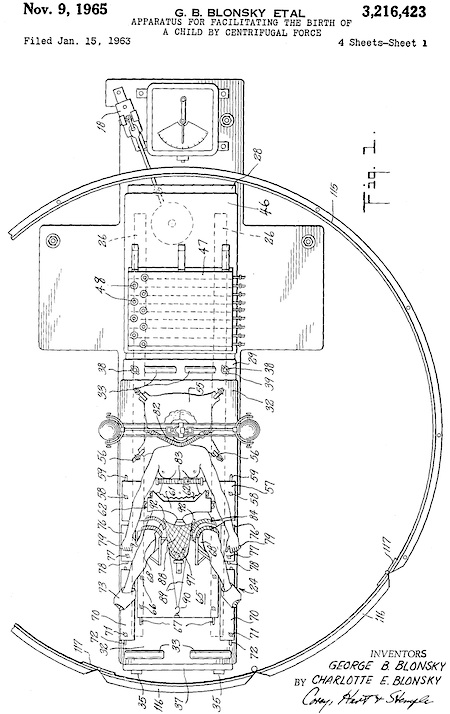 NEWS: The Blonskys and their device will be honored at this year’s Ig Nobel Prize ceremony, at Harvard University on September 12, and at the Ig Informal Lectures, at MIT on September 14. The ceremony will include the premiere of a new opera about the Blonskys and their patent. The opera singers will be backed by an orchestra composed of eminent Boston area researcher/doctors, and supported by several Nobel laureates in non-singing roles. The entire event will be webcast live, worldwide.

NEWEST NEWS: We have just now learned that George Blonsky was a graduate of MIT, class of 1923 or thereabouts. We will research further detail on that. It is our hope that some part of MIT will choose to help honor the work of George Blonsky during Ig weekend, when the opera premieres and the Blonsky relatives are in town.