Smithsonian magazine writes about Ig Nobel Prize-winner Charles Spence (who performed at our recent show in Leeds, on this year’s Ig Nobel Tour of the UK) and some of his research:

Charles Spence is multisensory researcher in London, who has been messing around with how sounds modify flavor. “We’ve shown that if you take something with competing flavors, something like bacon-and-egg ice cream, we were able to change people’s perception of the dominant flavor—is it bacon, or egg?—simply by playing sizzling bacon sounds or farmyard chicken noises.”

The 2008 Ig Nobel Prize in nutrition was awarded to Massimiliano Zampini of the University of Trento, Italy and Charles Spence of Oxford University, UK, for electronically modifying the sound of a potato chip to make the person chewing the chip believe it to be crisper and fresher than it really is. [REFERENCE: “The Role of Auditory Cues in Modulating the Perceived Crispness and Staleness of Potato Chips,” Massimiliano Zampini and Charles Spence, Journal of Sensory Studies, vol. 19, October 2004,  pp. 347-63.]

Here is a photo of Professor Spence (wearing a chef’s hat) and some of his colleagues: 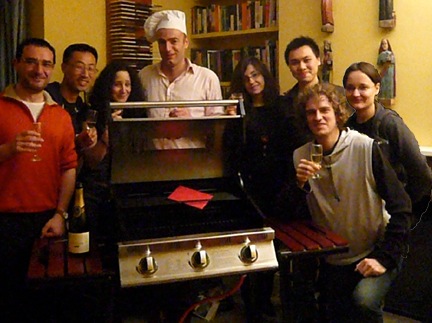 (Thanks to investigator Liz Chapin for bringing this to our attention.)