Bolsonaro’s ailment is reported in many news outlets. The Dutch newspaper de Volkskrant says, today: “Brazilian President Bolsonaro hospitalized with persistent hiccups—There is a lot of speculation in Brazil as to why President Jair Bolsonaro has had the hiccups for ten days.” 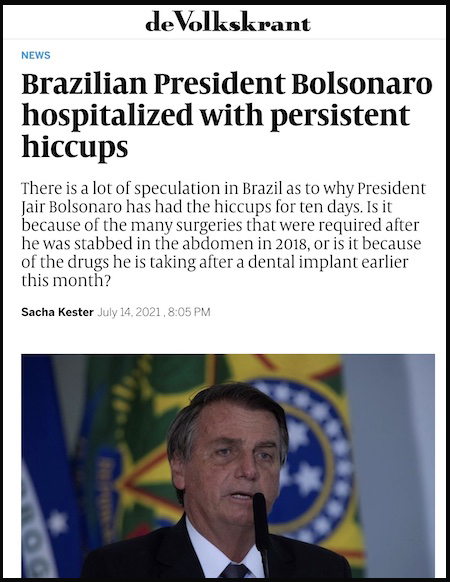 President Bolsonaro is himself an Ig Nobel Prize winner.

The 2020 Ig Nobel Prize for medical education was awarded to Jair Bolsonaro of Brazil, Boris Johnson of the United Kingdom, Narendra Modi of India, Andrés Manuel López Obrador of Mexico, Alexander Lukashenko of Belarus, Donald Trump of the USA, Recep Tayyip Erdogan of Turkey, Vladimir Putin of Russia, and Gurbanguly Berdimuhamedow of Turkmenistan, for using the Covid-19 viral pandemic to teach the world that politicians can have a more immediate effect on life and death than scientists and doctors can.