We note with sadness the news that Ig Nobel Prize winner Dr. Francis Fesmire died. Dr. Fesmire found joy and fame by putting his finger on — nay, in — the pulse of his times. He was awarded the 2006 Ig Nobel Prize in medicine for his medical case report “Termination of Intractable Hiccups with Digital Rectal Massage” [Annals of Emergency Medicine, vol. 17, no. 8, August 1988 p. 872]. Inspired by Dr. Fesmire’s medical paper,  Majed Odeh, Harry Bassan, and Arie Oliven of Bnai Zion Medical Center, Haifa, Israel, applied his technique, found success, and reported it in a medical paper also titled “Termination of Intractable Hiccups with Digital Rectal Massage.” They shared the Ig Nobel Prize with Dr. Fesmire, and he with them.

Here’s video of Dr. Fesmire’s acceptance speech at the Ig Nobel ceremony, and the subsequent demonstration of his work (the demonstration featured Professor William Lipscomb, a Nobel laureate in chemistry). It begins at about the 1:02:00 point in the video:

We ask you to join us, and raise a finger in salute to Dr. Fesmire. Thanks to him, life is not an endless series of hiccups. 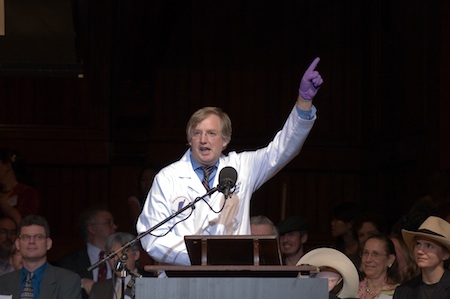 The Daily Chattanoogan reported his passing, in their January 31 edition:

Dr. Francis Fesmire, a longtime member of Erlanger’s medical staff and physician leader in the Emergency Medicine Department and throughout the nation, died suddenly on Friday. A statement from Erlanger officials said, “We extend our condolences to Dr. Fesmire’s family, particularly his wife Connie and sons, Forrest and Hunter, and mourn the loss of this extremely gifted and respected emergency medicine physician”…. On a national level, Dr. Fesmire served as chairman of the Clinical Policy Committee of theAmerican College of Emergency Physicians (ACEP) from 2010 to the present.  In 2009 he was awarded the “Hero of Emergency Medicine” award by the American College of Emergency Physicians.  He was also awarded the Ig Nobel Prize for Medicine in 2006. “

His friend John Shearer published a remembrance of Dr. Fesmire, a few days later in that same newspaper.

Dr. Fesmire returned to the Ig Nobel ceremony in several years, gleefully taking a bow, distributing rubber gloves and KY jelly, and offering to apply his technique, gratis, to any audience member in need. He often expressed his intent to take part, some year, in the annual Ig Nobel Tour of the UK (for the UK’s National Science and Engineering Week) — alas, that is a delight that was not fated to be.

Dr. Fesmire explains why chest pain patients are like a box of chocolates (2009)

Dr. Fesmire explains how he broke his ankle, with dolls (2012)

An appreciation (one of many — this one appeared yesterday) of the influence of Dr. Fesmire’s finger

Here’s a photo of Dr. Fesmire in 2008, when he returned to the Ig Nobel ceremony and also participated in the Ig Informal Lectures at MIT: 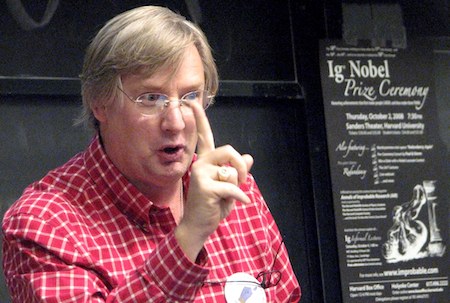