Kees Moeliker, 2003 Ig Nobel Biology Prize winner, participated in this year’s Ig Nobel Prize ceremony. He writes about it in the October 9, 2007 issue of The Guardian. His report (or click here for the version with photos) includes this passage:

We are in the Sanders theatre to meet new and returning winners. The first to show up is Francis Fesmire, of the University of Tennessee College of Medicine, who won the 2006 Ig Nobel medicine prize for his novel treatment of intractable hiccups with digital rectal massage.

What has happened to him since winning an Ig? “The phone did not stop ringing for months: interviews and talks in all parts of the country,” he says. But, strangely, Dr Fesmire was not asked to treat a poor girl in Florida who had the hiccups for six weeks.

Brian Witcombe, of Gloucester, and Dan Meyer of Antioch, Tennessee, have won the 2007 medicine prize for their penetrating medical report Sword Swallowing and its Side Effects, published last year in the British Medical Journal. Until today, Witcombe, a radiologist, and Meyer, a professional sword-swallower, have never met.

“Almost nothing was published about the medical side of sword swallowing, and Dan Meyer’s database of all members of the Sword Swallowers’ Association International was a true goldmine. We exchanged hundreds of emails,” says Witcombe. Both new winners had heard only vaguely about the Ig awards before Abrahams phoned them. Despite his ignorance, Witcombe says he was “flattered, delighted and amused” and imagines colleagues “may feel a little envy and extra respect”. Meyer says he will never forget the moment that he was notified of his nomination.

In the photo above right: 2006 Ig Nobel Medicine Prize winner Francis Fesmire explains his work to Nobel Laureates Craig Mello (left) William Lipscomb and Dudley Herschbach moments after the 2007 ceremony. In the photo below, 2007 Medicine Prize co-winner Brian Witcombe is partly visible behind and to the left of the red hand. Both photos: David Holzman / Annals of Improbable Research. 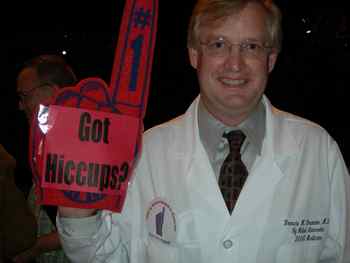