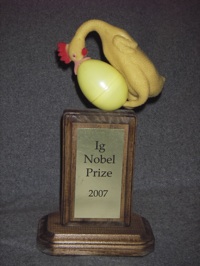 (Click here for a map and directions, here for info about how to pahk your cah near Hahvud Yahd. But please do not use the Gannon method.)

The 17th First Annual Ig Nobel Prize Ceremony will announce and introduce the ten new Ig Nobel Prize winners. The winners are traveling to the ceremony, at their own expense, from several continents. The Prizes will be handed to them by a group of genuine, genuinely bemused Nobel Laureates, all before a standing-room only audience of 1200 people. Full details and action pictures will appear in the Nov/Dec 2007 issue of the Annals of Improbable Research. The ceremony also includes other wonders.


Radio: The ceremony will be recorded for later broadcast, on Friday, November 23, the day after Thanksgiving, on National Public Radio's "Talk of the Nation/ Science Friday with Ira Flatow."

Theme: Every year, the ceremony has a new theme. (The theme pertains to some of the goings-on at the ceremony, though not necessarily to any of the year's prize-winning achievements). This year's theme: CHICKEN.

Additional highlights : In addition to the awarding of the Prizes, the ceremony will include a variety of momentously inconsequential events. Among them:

* Time limits to be enforced by Mr. John Barrett, the Ig Nobel Referee

FREE ADMISSION -- but seating is limited

A half-afternoon of improbably funny, informative, brief (5 minutes each, plus a few questions & answers with the audience), high-spirited public lectures, in which the new Ig Nobel Prize winners will attempt to explain what they did, and why they did it.

The new winner's talks will be preceded by a talk by Kees Moeliker (Ig Nobel Biology Prize 2003), who will discuss his most recent discoveries.

This free event is organized in cooperation with the MIT Press Bookstore.

The Ig Informal Lectures are co-sponsored by the MIT Press Bookstore.