(1) Loading some EpiPens (the little injection devices many people use to treat a bad allergic reaction) into washing machines, and then (2) washing them, and then (3) firing those washing-machine-washed EpiPens into hunks of meat was the basis for an experiment.

Details are in the study: “The Effects of Washing on EpiPen Epinephrine Auto-injector Device Integrity and Function,” Andrew McCray, Julie Brown, and Pingping Qu; Journal of Allergy and Clinical Immunology, vol. 145, no. 2, 2020, p. AB5. (Thanks to Josh Steinberg for bringing this to our attention.) 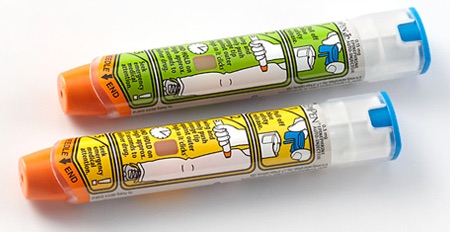 RATIONALE: Prescribing information for EpiPens indicate that the carrier tube is not waterproof. No studies have shown the effects of submerging an EpiPen in water. We aimed to determine the function and integrity of EpiPens after enduring a washing machine cycle.

METHODS: For 68 pairs of same-dose, same-lot, post-consumer expired EpiPens (15 0.3 mg and 53 0.15 mg), one was washed in its carrier tube through the colors cycle of a top-loading washing machine, while its pair was kept at usual conditions. Both were then fired into meat. The increase in meat mass and decrease in device mass were measured to estimate the mass of solution fired….

RESULTS: Washed devices fired a greater mass of epinephrine solution into the meat and devices lost more mass during firing, versus controls. Ten washed devices failed to deploy the needle cover after firing. The effect of washing did not differ by dose or expiration date….

CONCLUSIONS: Washing EpiPens impaired their function. These devices should not be used if accidentally placed through a washing machine cycle