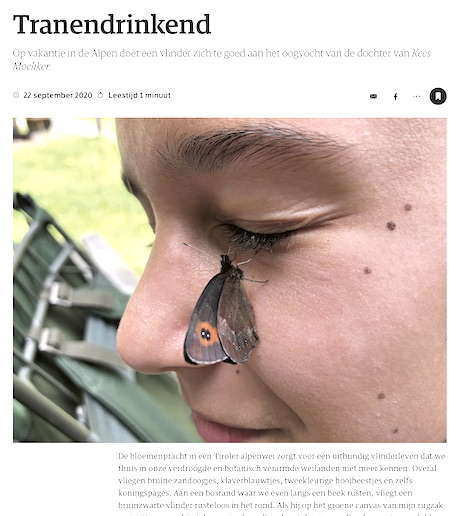 Here is a machine-translation into English of his report in the September 22, 2020 issue of the Dutch newspaper NRC:

While on holiday in the Alps, a butterﬂy feasts on the eye ﬂuid of Kees Moeliker’s daughter

The splendor of ﬂowers in a Tyrolean alpine meadow provides an exuberant butterﬂy life that we no longer know at home in our parched and botanically impoverished Dutch meadows. Everywhere are mazarine blues, pearly heaths, meadow browns, and even swallowtails.

A brown-black butterﬂy ﬂies around restlessly at a forest edge where we rest along a brook. When he sits down on the green canvas of my backpack, the orange wing band appears with striking black eye spots with bright white centers. I don’t know the species, but with the iObs app it becomes clear that it is the summer erebia (Erebia aethiops), a common species in the Alps. Nothing new under the sun, but that changes when the butterﬂy lands on my daughter’s nose. “It is very itchy, Daddy,” says Anna Inez (12), who admirably lets nature take its course, even as the insect slowly moves towards her eye. In cases like this, even on vacation, all I can do is observe and record: the butterﬂy – a male – is now sitting on her cheek, poking between her narrowed eyelids with its proboscis. My very own child undergoes a blatant attempt of ‘lachryphagy’ – drinking tear ﬂuid – by a European diurnal butterﬂy!

Thanks to decades of research by Hans Bänzinger, this behavior is known, but only in tropical moths, ﬂies and bees. The Swiss entomologist consistently illustrated the countless articles he published on lachryphagy with terrifying photos of his own wide-open eyes in which insects often greedily feast on his tear ﬂuid.

This tear-drinking has now been recorded in more than a hundred insect species. They are after sodium and proteins, mainly in cattle, horses, deer and elephants and to a lesser extent in caimans, turtles and birds. About 25 insect species, most of them moths, also suck moisture from people’s eyes. In teardrop-drinking butterﬂies, the proboscis acts as a suction organ that is specially equipped with nasty spines and barbs (for grip) but with a ﬂexible tip, designed not to irritate the victim unnecessarily. Bänzinger only felt extreme pain when attacked by the Lobocraspis griseifusa moth with squinted eyes. With his eyes open, he experienced nothing worth mentioning or ‘pinpricks’. Anna Inez described the feeling as “irritating”.

After barely two minutes the butterﬂy ﬂies away and lands (because of my glasses?) on my lower lip. I can barely suppress my ﬁrst reﬂex (splash!)