“Spoons are used to lift fluids or semi-solids from a bowl, pot or plate. Most fluids are held within the outer lip of the spoon. Traditional spoons include a bowl portion and a handle that extends from the bowl portion. While traditional spoons are effective for preparing, eating, or serving foods, often times liquids drip off of a bottom surface of the bowl portion due to the rounded shape. This can cause stains around the bowl and on the clothing of the person that is eating.

What is needed is a spoon with a modified bowl portion to prevent or reduce dripping of liquid therefrom. The spoon disclosed in this document provides the solution “

This information is provided in a newly issued (Aug 11th 2020) US patent entitled : ‘Modified spoon to reduce the dripping of liquids’ – in which Californian inventors John Patrick Cockrell and Jessica Sweet Ipina disclose their improved spoon. 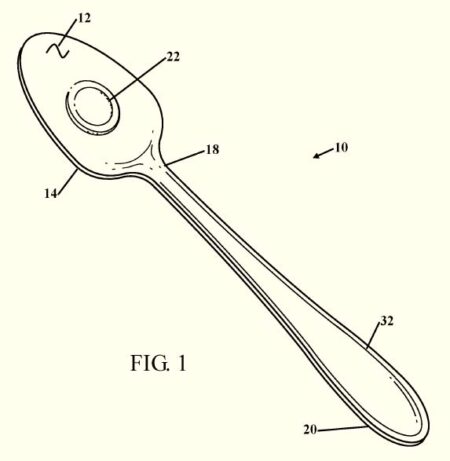 “This invention relates to improvements in a spoon. More particularly, the bowl of the spoon has a rounded center area that to reduces or eliminates the dripping of liquids from a bottom surface of the bowl.”

BONUS Assignment [optional] : Explain, from a fluid dynamics standpoint, why a spoon with a central raised divot would drip less than one without one.