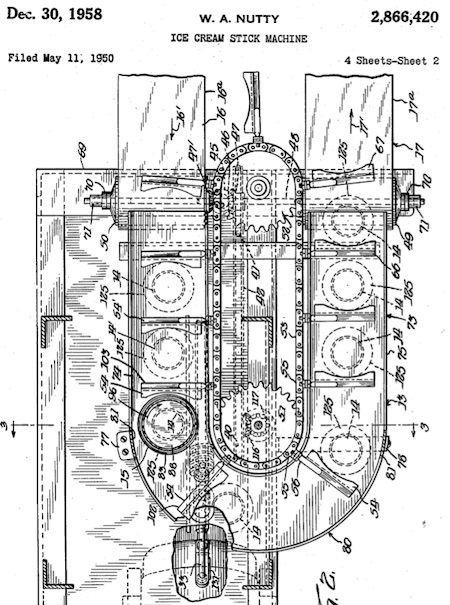 This invention relates to a method and apparatus for forming an ice cream novelty, and more particularly to an ice cream bar or edible comestible in the form of a stick composed of a number of flavors or colors of ice cream molded in a manner to produce an ornamental surface having a spiral or “barber pole” appearance.

A principal object of the invention is to provide an ornamental frozen confection or edible comestible having not only an ornamental surface having eye appeal, but also taste appeal by providing multiple flavors in the same confection.

A further object of the invention is to provide a frozen confection in which there may be embedded a stick for ease in eating and also provided with a wrapper or container adapted to catch the drippings or fragments from the confection while it is being consumed.

Another object of the invention is to provide a suitable wrapper and stick for a frozen confection which may be simply applied by hand or automatic machinery and which may be readily opened for consumption of the frozen comestible.

We remind you to not neglect, unless you want to, a study on Ice Cream Sticks’ Aroma Influence.