The penguin pooing pressure calculation that won the 2005 Ig Nobel Prize for fluid dynamics has been calculated anew by a different group of scientists.

The new study is: “Projectile Trajectory of Penguin’s Faeces and Rectal Pressure Revisited,” Hiroyuki Tajima [@HiroyukiTajima3] and Fumiya Fujisawa, arXiv 2007.00926v1, 2020. The authors, at Kochi University and at the Katsurahama Aquarium, Japan, report: 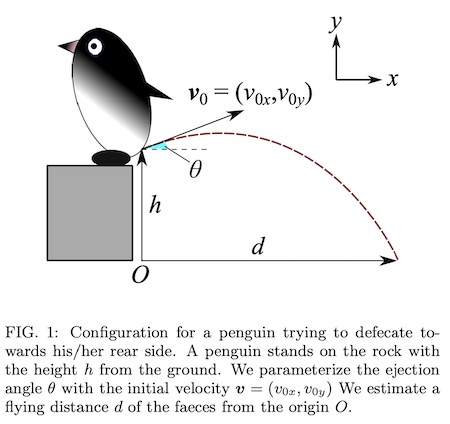 We discuss a trajectory of penguins’ faeces after the powerful shooting due to their strong rectal pressure…. We estimate the upper bound for the maximum ﬂight distance by solving the Newton’s equation of motion…. In the presence of the viscous resistance, the grounding time and the ﬂying distance of faeces can be expressed in terms of Lambert W function. Furthermore, we address the penguin’s rectal pressure within the hydrodynamical approximation combining Bernoulli’s theorem and Hagen-Poiseuille equation for viscosity corrections. We found that the calculated rectal pressure is larger than the estimation in the previous work….

In the pioneering work of Reference [2], it is reported that this actual pressure could range from 10 kPa for relevant values of the faeces viscosity and the radius of the the bottom hole.

The authors made a little video to explain their work:

And there’s general background info available for specialists. Here is one source:

That 2005 Ig Nobel Prize was awarded to Victor Benno Meyer-Rochow of International University Bremen, Germany and the University of Oulu, Finland; and Jozsef Gal of Loránd Eötvös University, Hungary, for using basic principles of physics to calculate the pressure that builds up inside a penguin, as detailed in their report “Pressures Produced When Penguins Pooh — Calculations on Avian Defaecation” (published in the journal Polar Biology, vol. 27, 2003, pp. 56-8). Here is a technical drawing from that original penguin poo pressure paper: 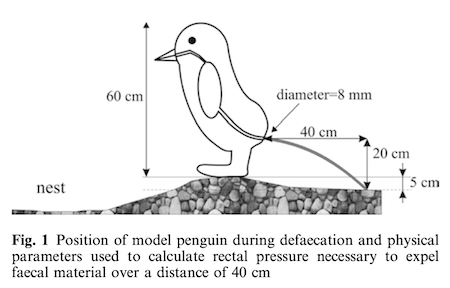 Meyer-Rochow has discussed why he undertook the question.

And by happy coincidence, this week the ICES Journal of Marine Science published his invited biographical essay “Ingredients to become a scientist: curiosity, enthusiasm, perseverance, opportunity, and a good pinch of luck.” The essay is filled with adventures, of which here is a tiny sample:

a personal highlight was the ﬁrst (and only) Jamaican Antarctic Expedition with my assistant Walton Reid in 1993 (which led me to be introduced to Queen Elizabeth II when she visited the University of the West Indies in Kingston, Jamaica). When asked by “The Queen” if it hadn’t been very cold in Antarctica and she inquired about how our work had beneﬁtted society, I replied that, of course, it had been a little cold at times and regarding our results, they had made the “book of human knowledge” just a tiny bit thicker (I am not a believer that all research must immediately be seen to be applied).

You have really got to keep your eyes open and retain a childish curiosity (curiosity may kill the cat, but for a scientist it is an essential ingredient: another piece of advice) and, when I saw (and photographed) pooping penguins, I immediately wondered about the pressure that these not exactly tall birds generate to propel their faeces up to 50 cm away from their nest’s edge. The research on this immensely important aspect of penguin biology, conducted with my research assistant Dr Joseph Gal, led to an Ig- Nobel prize from Harvard University, which quite honestly was very helpful to me in Japan and many other countries (as I, erroneously, was often announced to the audience as a “Nobel prize winner”—well, of sorts).

Meyer-Rochow Comments on the New Paper

UPDATE [July 6, 2020] We asked Benno Meyer-Rochow, co-author of the original paper, to read this new one and comment on it. Here is what he wrote:

I read the paper and am very pleased that other researchers have taken up our ideas to look into penguin pooping. In hindsight  we can say that it is great to read that others are inspired by our pioneering paper and refined the original estimate / model. They reinterpret the distance in the model, the motion in the air and they even considered the effect of contraction in their calculations. Nice refinement of our original simplified model. Although in value of estimated pressure there is not that much of a difference is obtained compared with our result (same order of magnitude), but it is a good practical result that dmax = 1.34m  based on the trade-off of angle and distance dependency functions came out from their model. It is also a nice result that the paper can be used for didactic purposes in future physics teaching. Although we never saw any Adelie penguin ‘shoot’ their faeces in a slightly upward-directed arc, it is of course possible that either we missed that or that these penguins sometimes do that when they stand on an uneven rock and/or  bend forward more than what we had observed. So, the calculations of the authors do make sense and I would accept the article for publication as is.