Victor Benno Meyer-Rochow tells why he and his colleagues calculated the internal pressure of a penguin. He then confides that there remain questions worth answering: 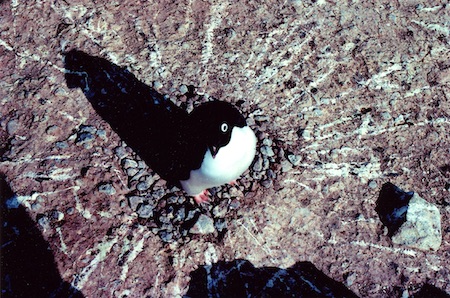 …The pressing question had been that of the pressure of course, but what still puzzles me is why the streaks were found all around the nest and not just in one direction? Did the penguins choose the direction into which they lifted their tail or did the end result depend on the direction of the wind? I don’t know the answer and perhaps we need a second Jamaica Antarctic Expedition to find out. What I do know is that, compared with seed eaters, the meat and fish-eating birds expel heir faeces with greater force, because their wastes contain higher amounts of uric acid, which is corrosive and irritating: watch an eagle you visit a zoo the next time. But take care where you stand: like penguins these birds can bite – and shoot, from the rear and below the belt!

The 2005 Ig Nobel Prize for fluid dynamics was awarded to Victor Benno Meyer-Rochow of International University Bremen, Germany and the University of Oulu, Finland; and Jozsef Gal of Loránd Eötvös University, Hungary, for using basic principles of physics to calculate the pressure that builds up inside a penguin, as detailed in their report “Pressures Produced When Penguins Pooh — Calculations on Avian Defaecation.”