The Bavarian Pickle-Juice Experiment is using salty waste-water from pickle-making to keep roads from becoming icy. Ig Nobel Prize winner Elisabeth Oberzaucher alerts us to this, with the comment “Waste from the food industry keeps roads ice-free – I’m curious to see what comes out during the testing phase.” 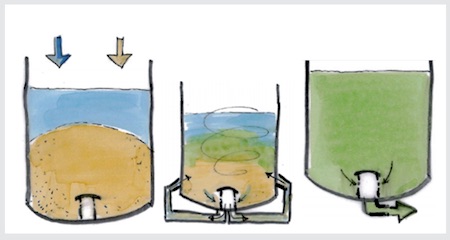 The publication Geo reports [in German, which we have machine-translated here into English] details, with the headline “Why the winter service in Bavaria now uses cucumber water instead of road salt“:

The company Develey Senf & Feinkost GmbH, based in Dingolfing in Lower Bavaria, processes 17,000 tonnes of cucumbers into gherkins every year. The cucumber water from the main plant, which was created during this process, will help to free the streets from ice and snow in the future.

For this purpose, the salt water left over from food production, which until now had to be laboriously clarified after production, is to be converted into salt brine. Subsequently, road maintenance companies are supplied with the recycled brine, which they use for winter service. By recycling the leftover salt water from the cucumber production, the total amount of salt that enters the environment is reduced and thus relieved.

The Bavarian State Ministry for Housing, Construction and Transport expects to save 700 tons of salt and 4.9 million liters of water this winter through the locally prefabricated brine . The company Develey saves in return the tedious clarification.

The technique has been used experimentally in other places. A 2015 report by RoadsBridges.com tells of the experimental use of brine in Lincoln, Nebraska: 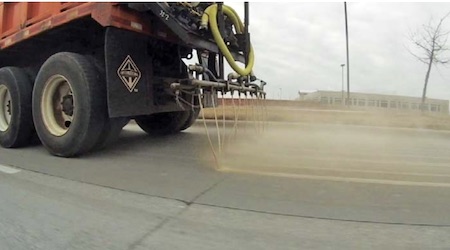 The city equipped 10 tanker trucks to carry and apply the brine using pumps and spray nozzles. In addition, trucks that spread granular material were equipped with saddle tanks to spray the granular material as it was being spread…. Additional food processing byproducts such as cheese, pickle, potato or beet juice were often incorporated into mixtures depending on the region.

In 2014, a news report in Polk County, Wisconsin announced “Cheese brine discovery honored with Gladfelter Award“. (Thanks to Chris Toney for alerting us to that.)