“The idea that one can study scholar journal publishing behavior by looking at their brain’s fMRI response to the ‘journal impact factor‘ of the journal is, to an academic serials librarian at least, incredibly funny. I suppose this is the serious-professor version of hooking up a child to an fMRI and offering them their favorite candy.” That’s the word from Melissa Belvadi, Collections Librarian at the University of Prince Edward Island, who alerted us to this study:

The incentive structure of a scientist’s life is increasingly mimicking economic principles. While intensely criticized, the journal impact factor (JIF) has taken a role as the new currency for scientists. Successful goal-directed behavior in academia thus requires knowledge about the JIF. Using functional neuroimaging we examined how the JIF, as a powerful incentive in academia, has shaped the behavior of scientists and the reward signal in the striatum. We demonstrate that the reward signal in the nucleus accumbens increases with higher JIF during the anticipation of a publication and found a positive correlation with the personal publication record (pJIF) supporting the notion that scientists have incorporated the predominant reward principle of the scientific community in their reward system….

Thus, the JIF as a novel and powerful paradigm in academia has already shaped the neural architecture of reward processing in science.

Here’s visual detail from the study: 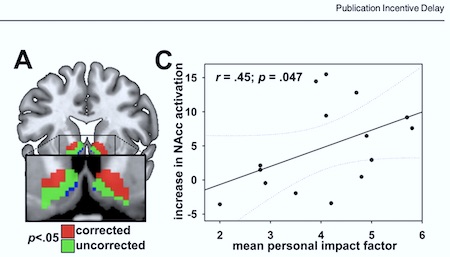 NOTE: Some people might suggest that this study was intended to be a joke.