One newly published brain research paper is obviously a joke intended for the small community of scientists who use FMRI equipment. And it’s a good example of how a joke meant for insiders can be difficult or impossible (or at least take hours and hours of excited exposition) to explain to anyone else.

If you are not of that community, and you have days or weeks to devote to listening to someone’s explanation of why this joke might be funny, ask an fMRI researcher to explain this to you:

“The incentive structure of a scientist’s life is increasingly mimicking economic principles. While intensely criticized, the journal impact factor (JIF) has taken a role as the new currency for scientists. Successful goal-directed behavior in academia thus requires knowledge about the JIF. Using functional neuroimaging we examined how the JIF, as a powerful incentive in academia, has shaped the behavior of scientists and the reward signal in the striatum. We demonstrate that the reward signal in the nucleus accumbens increases with higher JIF during the anticipation of a publication and found a positive correlation with the personal publication record (pJIF) supporting the notion that scientists have incorporated the predominant reward principle of the scientific community in their reward system.” 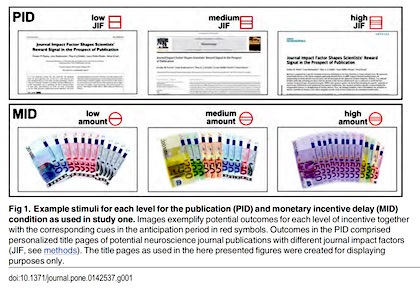 BONUS: Deeply deadpan humor in a paper published in 2005.