Despite many decades (or some might say centuries) of concerted scholarly effort towards answering the question ‘What is intelligence?’ there still isn’t an answer that everyone can agree on. Perhaps then, the time has come to tackle the problem from another direction and ask instead ‘What is stupid(ity)?’ ? 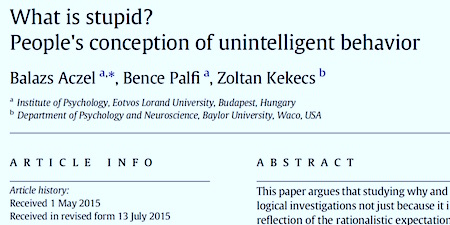 A team of researchers from the Institute of Psychology, Eötvös Loránd University, Budapest,  Hungary and the Department of Psychology and Neuroscience, Baylor University, Waco, US, ask, and attempt to answer, just such a question in the Nov-Dec 2015 issue of the scholarly journal Intelligence, see: ‘What is stupid?: People’s conception of unintelligent behavior’.

participants to fill in questionnaires and rate stories retrieved from popular internet sources found via searches of “stupid thing to”, “stupidity”, “it was stupid of”, “it was very stupid” and “stupid”. As a result of their analyses, the team conclude that

“[…] people use the label stupid for three separate types of situation: (1) violations of maintaining a balance between confidence and abilities; (2) failures of attention; and (3) lack of control. The level of observed stupidity was always amplified by higher responsibility being attributed to the actor and by the severity of the consequences of the action. These results bring us closer to understanding people’s conception of unintelligent behavior while emphasizing the broader psychological perspectives of studying the attribute of stupid in everyday life.”

But sadly, those hoping for a firm and succinct definition of the concept won’t find one here, and, (bearing in mind the comparative scarcity of stupidity research to date) the team note :

“As a first empirical exploration of this topic, this study naturally comes with a number of limitations and opens several questions to be answered. Since we collected stories from popular internet websites and only used local raters, it remains unanswered how much is the concept of stupid and to what extent are the monitoring functions culturally specific.”

A full copy of the paper may be found here.