A discovery about park benches leaps from a press release from the University of Sheffield:

Researchers in the University’s Department of Landscape and the London-based think tank, found that sitting on benches allows people to spend longer outside

The press release goes on to explain that this property of benches  “is both beneficial for mental health and allows people to connect with others in their community.” Further details of the research appear in a study called “Benches for everyone,” by Radhika Bynon and Clare Rishbeth, published by The Young Foundation. 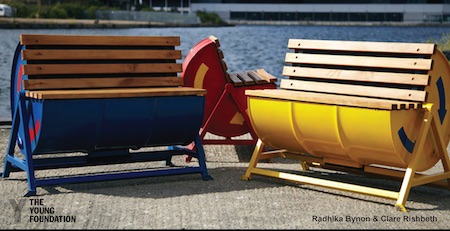 Here’s a snippet from that paper:

Fitz, a teenager, sitting up on the back of the benches with his friends said “if you spent longer than a week in Woolwich, yeah, you would see so much stuff, you’d just see everything”. By observing difference in this way, people spoke about how they develop an awareness of a broader range of behaviours and activities, helping to engender greater tolerance. This high-density location also plays host to a wide network of ‘loose ties’, flexibly accommodating the churn of neighbourhood population change, and allowing participation and a sense of belonging without making demands.

(Thanks to investigator John Pullin for bringing this to our attention.)