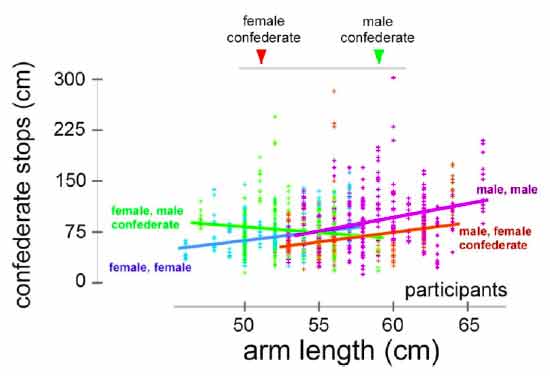 Much has been written about the concept of ‘proxemics‘ and the notional invisible bubble that can be used to depict one’s ‘personal space’. But how big is the bubble? And is there a simple and reliable way to measure it? Italian researchers Nicola Bruno (Dipartimento di Neuroscienze, Unità di Psicologia, Università di Parma) and Michela Muzzolini (Dipartimento di Scienze della Vita, Unità di Psicologia ‘Gaetano Kaniza’, Trieste) suggest that there might be. The length of one’s arms. In what is believed to be the first experimental study to assess the effect of body size on proxemic personal space, the team found that :

“In same-­sex interactions, personal distance was modulated by arms length, independently of sex. The longer the arms of the participant, the larger the distance in both men and women. “

And/but with a previously undiscovered twist: