Having failed to perish, they proceeded to publish.

Serendipity and not-careful-enough cooking technique by Norwegian shellfish scientists (for their own Christmas gathering) led to a nasty illness for two-thirds of their group, which led to a biomedical investigation, which led to a published scientific study about it all, which led to a report in Forskening.no which begins: 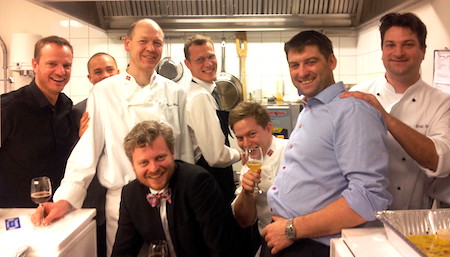 Friday 13th of December 2013: It is morning and Arne Duinker is in full swing making the food that he and colleagues have to enjoy on the Christmas table a few hours later.

Doves, a daily seafood scientist, have allied themselves with a few colleagues and some professional seafood chefs.

Little do they know that something is going to be terribly wrong.

“This was the first Christmas table where we decided to make seafood for everyone, and we should do it ourselves,” said Duinker.

In 2013 he was working at the National Institute of Nutrition and Seafood Institute (NIFES), which has today become a part of the Institute of Marine Research (HI)….

(Thanks to Kjell Ivar Øvergård for bringing this to our attention.)

BONUS: Basic info about norovirus, the little protagonist in this drama.