New research about how paper crumples was done in the same chunk of Harvard that produced an Ig Nobel Prize-winning study about how sheets get wrinkled. It builds on—and adds new wrinkles to—that earlier research. 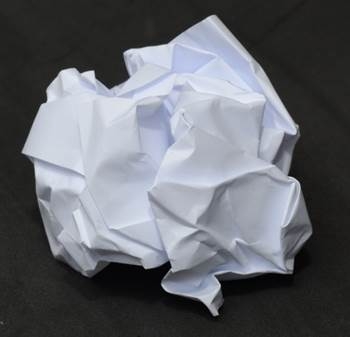 Siobhan Roberts reports, in the New York Times, about the paper-crumpling study:

This Is the Way the Paper Crumples
In a ball of paper, scientists discover a landscape of surprising mathematical order.

While working on his doctoral thesis at Harvard over the last few years, Omer Gottesman spent a lot of time at his desk crumpling sheets of paper, especially when he was stuck. He’d crumple a sheet, uncrumple it, stare into its depths, and think, “There must be something that would make all this mess look a little less messy.”

Crumple, uncrumple, crumple. Sheet after sheet landed in the recycling bin, each one blank but for its chaotically creased geography. In time, a semblance of order emerged.

Crumpled wads of paper are no doubt as old and commonplace as paper itself — “graves for failed theories,” Mr. Gottesman, a physicist, has called them. But for him, the crumpled paper itself was the research….

The 2007 Ig Nobel Prize for physics was awarded to L. Mahadevan and Enrique Cerda Villablanca, for studying how sheets become wrinkled.

BONUS FACT (somewhat related): At the Ig Nobel Prize ceremony, many, many paper airplanes fly. Quite a few of them are, or become, crumpled.