Two reports about headphone jacks, appearing in the same year, raise possibilities. Here are portions of the two reports, side by side: 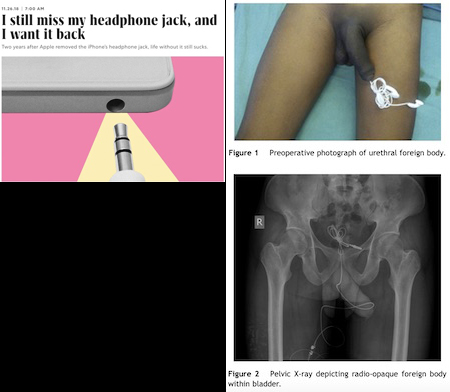 The Asian Journal of Urology reports:

“Listening to his inner voice? An unusual urethral foreign body: A review of literature and few learning points,” Abheesh Varma Hegde, Suryakanth Choubey, Revanna Siddappa Kanagali, Gotam Pipara, A. Nagaraja Rao, and A. Mohan, Asian Journal of Urology, vol. 5, no. 2, April 2018, pp. 131-132. (Thanks to Richard Wassersug for bringing this to our attention.) The authors, at St. Johns Medical College Hospital, Bangalore, India, report:

“A 26-year-old man presented to the Emergency Department with dysuria and urinary retention. There were no other urinary symptoms. History revealed he had self-inserted the jack of an ear phone into his penis 2 h prior, for autoerotic stimulation. There were three prior instances of such insertions after which he would remove the ear phones himself. He had also tried to catheterize himself in the past, for sexual gratification. There was no history of underlying psychiatric illness. On examination, the ear phones and the cable were dangling from the external urethral meatus and the cable was palpable within the penile urethra (Fig. 1). Pelvic radiography showed a variable length of the cable within the bladder that appeared to be coiled and the ear phone jack, intact (Fig. 2).”

BONUS (distantly, if at all, related): Plug and Play