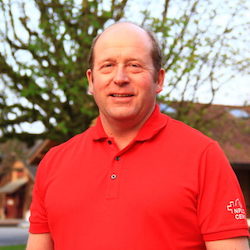 “Can music make cheese tastier? Swiss Emmental maker experiments” is the headline of an AFP report in the Japan Times. The main scientist doing the research is Dr. Beat Wampfler, a veterinarian [pictured here]. Here’s some detail:

[A] Swiss cheese-maker has embarked on an experiment to test the impact of music on Emmental, one of the most famous cheeses in Switzerland….

In one corner of his impeccably clean cellar, nine open wooden crates sit with wheels of Emmental inside, and small music speakers directly below. Since September, the cheeses have been blasted with sonic masterpieces from the likes of rock gods Led Zeppelin to hip-hop legends A Tribe Called Quest. The project hopes to show that the power of music can influence the development, characteristics and even flavor of the cheese….

“At first we were skeptical,” admitted Michael Harenberg, the university’s music director. “Then we discovered there is a field called sonochemistry that looks at the influences of sound waves, the effect of sound on solid bodies.” …

Scientists have experimented with sonochemistry, in particular looking into how ultrasound can affect chemical reactions.

The news report does not mention whether this experiment consciously builds on the study that won the 2006 Ig Nobel Prize for chemistry. That prize was awarded to Antonio Mulet, José Javier Benedito and José Bon of the University of Valencia, Spain, and Carmen Rosselló of the University of Illes Balears, in Palma de Mallorca, Spain,  for their study “Ultrasonic Velocity in Cheddar Cheese as Affected by Temperature.”