Troy Hurtubise meets his destiny in a grand obituary, written by Tom Hawthorn, in the (Toronto) Globe and Mail. Here are some highlights:

Troy Hurtubise combined the fevered imagination of a mad scientist with the foolhardy bravery of Evel Knievel in his quest to design a suit impervious to bear attack…. 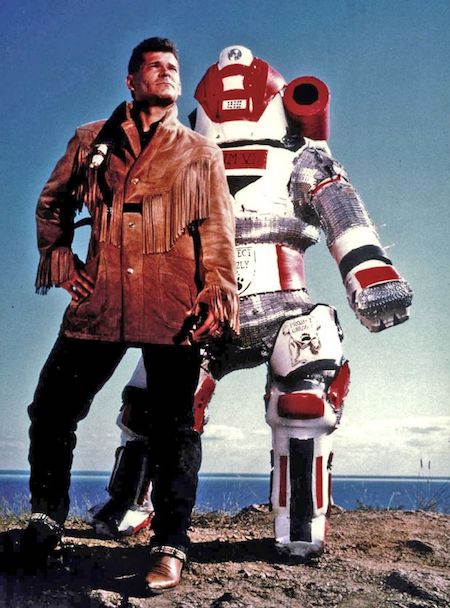 The fanatical mission was chronicled over the years in amateur videos showing a besuited Mr. Hurtubise enduring all manner of violence. He was whacked on the arms with sticks; plonked by a plank to his helmeted head; pummelled by a trio of baseball bat-swinging bikers in the parking lot of a bar. A sledgehammer was swung against his chest. He was poleaxed by a 300-pound swinging log. He was pushed over the Niagara Escarpment, tumbling helmet over boot before crash-landing onto shrubbery at the base. His father deliberately drove a pickup truck into him at 50 kilometres an hour, an act repeated 18 times, each resulting in his being catapulted into the air. He survived that test, as he survived walking through flames….

In 1998, his efforts were rewarded with an Ig Nobel Prize, a parody honouring unusual or trivial scientific achievements. He was feted at a playful ceremony at Harvard University and invited to lecture at the Massachusetts Institute of Technology. Among those who sang his praises was Harvard chemist Dudley Herschbach, himself a Nobel laureate.

A charismatic figure who spoke in a rapid-fire patter, Mr. Hurtubise fit in with elite scientists at Harvard as easily as he did among friends at Country Style donuts in North Bay. He was a flesh-and-blood, 5-foot-8 dreamer inside an indestructible, 7-foot-2 suit, a Canadian original who never did get to test his lifetime’s work against a bruin’s brute force.

We have written a bit—well more than a bit— here about Troy, over the years, most recently with our own tribute: “Exit, pursuing a bear: Farewell Troy Hurtubise.”