We have just heard the sad news that Troy Hurtubise died in a car-truck crash near his home town, North Bay, Ontario. We got to know Troy in 1998 when he was awarded an Ig Nobel Prize in the field of safety engineering, for developing, and personally testing, a suit of armor that is impervious to grizzly bears. Troy was an almost-Shakespearean character, with an added dash of Don Quixote. Troy’s bear quest, once begun, became lifelong. Now that Troy has exited life’s grand stage, one is almost compelled to say that, temperamentally, he exited, pursuing a bear.

Troy returned to the Ig Nobel ceremony the year after he won his prize, where he led a chorus of opera singers in paying tribute to his bear suit. Click here to see video of that stirring moment. 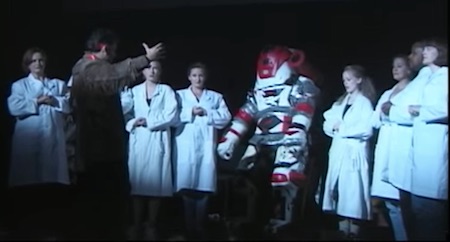 We stayed in touch, on and off, over the years as Troy pursued not just grizzly bears, but also a stream of sometimes overly-clever ideas involving electronic equipment, chemical substances, heavy construction machinery, spies, and the British Royal Family. We documented many of Troy’s adventures here, on the Improbable Research web site. Recent reports elsewhere tell of his adventures with coffee, hair, particles of dark matter, and life in general:

The first seven years or so of Troy’s grizzly bear adventures are still on display in a documentary film called “Project Grizzly“, directed by Peter Lynch and produced by the National Film Board of Canada. Here is that film:

Here are some news reports about Troy’s death:

Troy was a most unusual person. When he heard a colorful, even fanciful, idea emerge from his mouth, he seemed to feel honor-bound to make that idea come true, no matter what. He was, until this unfortunate highway crash, a willfully mythical creature—often bound in a strange and wondrous suit of titanium, duct tape, hockey pads, and his own imagination—walking, running, and occasionally toppling over, ever eager to seek out (and if necessary collide with) his destiny.

We, and the world, will miss him.

Here are some further tributes to Troy.