Documented improbable electrical treatments for pain relief are not restricted to shocks from the Nile Catfish. ‘An interesting Case’ is described by Professor Jock Murray of the Division of Neurology, Dalhousie University, Nova Scotia, Canada, in which he relates the bespoke treatment that a Canadian farmer had developed for alleviating constant pain in his leg. It involved a novel use for a Canadian Cooperative Electrical Cow Fence Machine.

“When he awoke with pain each morning he would dress and walk to the pasture, take off the boot on his painful right foot, and place it on the damp earth. Then he would grab the fence wire with his right hand to experience a repetitive jolt of electricity. He would hold on until the pain in his leg waned and then disappeared over 8–10 minutes.”

In the winter months, he brought the machine indoors and rigged it up to a metal saw blade which he stood on to receive the shocks [see photo]. 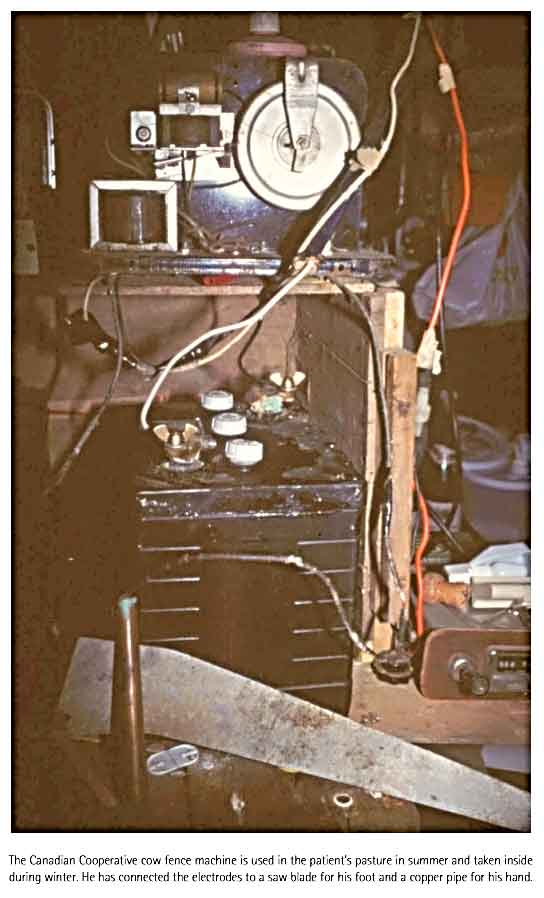 Professor Murray describes a visit to the farmer’s house to witness the treatment :

“He led me to the basement where the electrical machine was sitting on a shelf. Shaking off his boot he placed his foot on the saw blade, grabbed the metal pipe with his hand, and flicked the switch with his free hand. His body stiffened briefly to the pulsating jolts from the clicking machine. He stopped the machine after a few minutes and turned to me. ‘‘Want to try it now, Doc?’’ “

The treatment evidently worked well, because the farmer continued its use for many years, and did not feel the need for any further (conventional) medical assistance.