Lal Bihari, who founded the Association of Dead People, is back in the news (and he’s still, again, alive). Outlook India magazine reports, with the headline “In UP’s Azamgarh, ‘Living Dead’ Have A Long Legal Battle To Fight“: 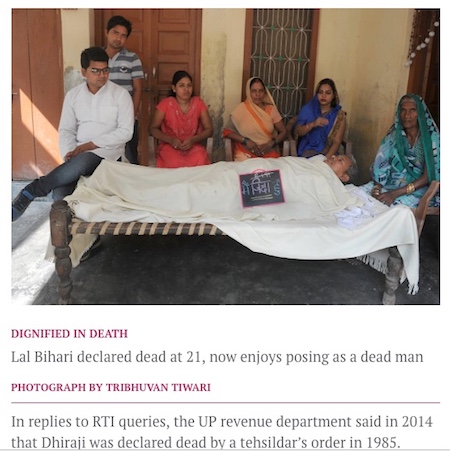 … At age 21, Lal Bihari applied for a loan to start a business. The bank wanted proof of identity and other documentation and he went back to his father’s village to get it. That’s when he heard the news of his own death! Now, Lal Bihari didn’t want any property. He just wanted to get on with life. “People called me ghost and satan to my face. They laughed at me. Nobody took it seriously,” says Lal Bihari, who now smiles at every dead joke you can throw at him.

Lal Bihari pleaded with every official possible to rectify the error, but in vain. He also tried many ruses to get an official document to acknowledge him as alive: it became his life’s mission to not be dead….

“I had read of him in a newspaper and kept the clipping for a few years before coming back to it. Since then, Lal Bihari has been like family. His son stayed with me for long periods,” says [Bollywood director Satish] Kaushik. “In 2003, when he won the Ig Nobel awards, the US denied him a visa to go and accept it.” Lal Bihari confirms this. “The US government didn’t want me there. They may have a lot of similar cases there and didn’t want any of them to start staking claims.”

A judgment on Lal Bihari’s case is now taught in some law schools, a scholar is writing a PhD thesis on him…

The 2003 Ig Nobel Peace Prize was awarded to Lal Bihari, of Uttar Pradesh, India, for a triple accomplishment: First, for leading an active life even though he has been declared legally dead; Second, for waging a lively posthumous campaign against bureaucratic inertia and greedy relatives; and Third, for creating the Association of Dead People.

Lal Bihari overcame the handicap of being dead, and managed to obtain a passport from the Indian government so that he could travel to Harvard to accept his Prize. However, the U.S. government refused to allow him into the country. His friend Madhu Kapoor therefore came to the Ig Nobel Ceremony at Harvard University, and accepted the Prize on behalf of Lal Bihari. Several weeks later, the Prize was presented to Lal Bihari himself in a special ceremony in India.

Here’s a TV news report, from several years ago, about Lal Bihari:

Here’s a report about the slightly-fictionalized movie that Satish Kaushik made about Lal Bihari: