Here’s video of the premier performance of “The Incompetence Opera”: 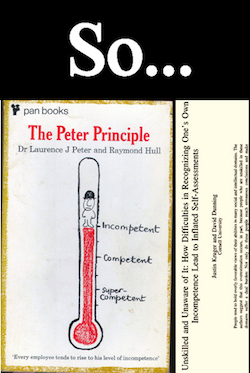 “The Incompetence Opera” is a musical encounter with the Peter Principle and the Dunning-Kruger Effect.
And with the word “so.”

The opera is composed of three short acts. “The Dunning Kruger Song” is the final act.

The entire opera libretto was printed in IgBill, the program handed out to the 1100 audience members in Sanders Theatre that evening. You can download IgBill as a PDF.

The libretto is also included in the special Ig Nobel issue (vol. 23, no. 6, November/December 2017) of the magazine Annals of Improbable Research. 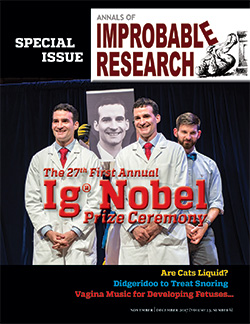 UPDATE JANUARY 2018: Dakota McCoy—whom you can see in the opera video, performing with a tray of drinks in hand—has published a new biology study. For details see “Dakota McCoy and the Blacker-Than-Black Bird Plumage.”

UPDATE JANUARY 2018: By popular demand, we have put up a video, also, of that concluding song of The Incompetence Opera. We hope you find it useful in discussions. Here is The Dunning-Kruger Song: