Barry Petchevsky performed his annual data-gathering exercise “What Did We Get Stuck In Our Rectums Last Year?” in Deadspin:

All reports are taken from the U.S. Consumer Product Safety Commission’s database of emergency room visits, and they are occasionally not for the faint of spirit…. 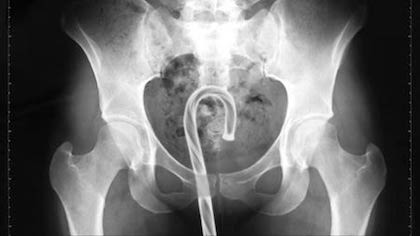 Petchevsky’s prodigious mining operation is in the tradition of the medical study that won the 1995 Ig Nobel Literature Prize. That prize was awarded to surgeons David B. Busch and James R. Starling, of Madison Wisconsin, for their deeply penetrating research report, “Rectal foreign bodies: Case Reports and a Comprehensive Review of the World’s Literature,” published in the journal Surgery (September 1986, pp. 512-519).

The Busch/Starling compendium include reports of, among other items: seven light bulbs; a knife sharpener; two flashlights; a wire spring; a snuff box; an oil can with potato stopper; eleven different forms of fruits, vegetables and other foodstuffs; a jeweler’s saw; a frozen pig’s tail; a tin cup; a beer glass; and one patient’s remarkable ensemble collection consisting of spectacles, a suitcase key, a tobacco pouch and a magazine.