Today the New York Times celebrates, deadpan, a fake relic of a historically influential example of pseudo-profound bullshit. Under the headline “This Is Not Arthur Laffer’s Famous Napkin,” The Times says:

It is one of the iconic moments in modern economics: A young professor named Arthur Laffer sketched a curve on a bar napkin in 1974 to show an aide to President Gerald R. Ford why the federal government should cut taxes.

The Laffer Curve became famous; the Republican Party became the party of tax cuts; and, in 2015, the Smithsonian announced that it was putting the napkin on display.

But the napkin now celebrated for starting a tax revolt is not, in fact, the original napkin…. 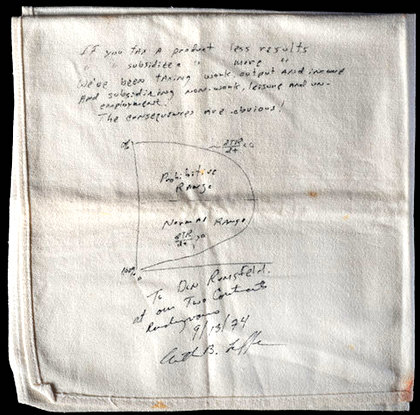 Although some politicians claimed to take the Laffer Curve seriously (thus leading to their claimed reverence for a replica napkin), mathematicians, economists, and the world in general delighted in pointing out that it was nonsense.

Martin Gardner, the Scientific American columnist, destroyed the Laffer curve illusion, in one of his final columns. Martin also is the person whose advice started me on my writing career. I wrote this about that, when Martin died:

My own favorite of Martin’s works is the final column he wrote for Scientific American — a deadly, hilariously efficient dissection of a gold-plated piece of nonsense. That final column was called “The Laffer curve and other laughs in current economics” [Scientific American, December, 1981, vol. 245, pp. 18-31]. It drew wrathful, spittle-flecked letters from  people who bought their intellectual fashion items at The Emperor’s New Clothes shop. “No economist has the foggiest notion of what a Laffer curve really looks like except in the neighborhood of its endpoints,” the column says. One of that column’s lovely technical drawings is reproduced below (thanks to Wikipedia). 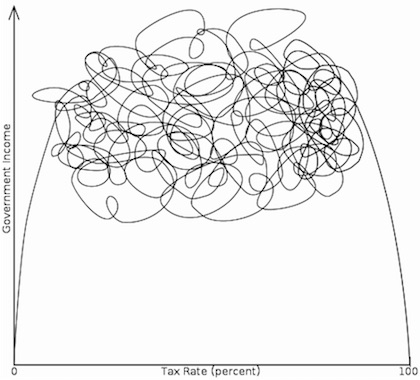 That final column itself  [you can read it online] is reproduced in the book The Night Is Large, a collection of many of Martin’s best writings.

In celebrating anew the Laffer curve, pretending that it corresponds to reality, some politicians (and perhaps the New York Times?) unintendedly also celebrate the 2016 Ig Nobel Peace Prize.

The 2016 Ig Nobel Peace Prize was awarded to Gordon Pennycook, James Allan Cheyne, Nathaniel Barr, Derek Koehler, and Jonathan Fugelsang for their scholarly study called “On the Reception and Detection of Pseudo-Profound Bullshit.” [That paper was published in the journal Judgment and Decision Making, vol. 10, no. 6, November 2015, pp. 549–563.]