From Mark Peplow’s review, in the journal Nature, of the new book by Ig Nobel Prize-winner Theo Gray: 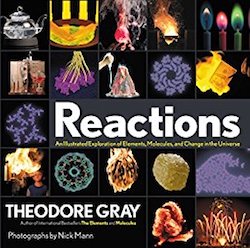 Gray’s career as a chemical evangelist began in 2002, when he misread a line in Oliver Sacks’s Uncle Tungsten (Knopf, 2001) and imagined the periodic table of elements as a literal table. A skilled woodworker, Gray decided to build it and stock cavities beneath each symbol with samples of the elements.

Then, he recalls, “things really got out of hand” (go.nature.com/2fdcm9b). The table won the 2002 Ig Nobel Prize in Chemistry, and spawned a cottage industry: Gray now sells periodic-table posters, books and quilts, and makes museum displays. With photographer Nick Mann, he has amassed a gallery of element photos, showcased in his 2009 book The Elements. Its sequel, Molecules, followed in 2014; Reactions is the final part of the trilogy (all published by Black Dog & Leventhal)….