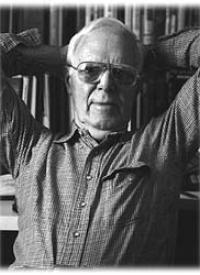 Martin Gardner died today. I owe him a great deal. In 1990, Martin gave me (a stranger, who wrote to him out of the blue) advice and encouragement about finding a place to publish my writing. His advice led directly to my becoming the editor of the Journal of Irreproducible Results, which led to the creation of the Ig Nobel Prize Ceremony and (when the Journal’s publisher was going to let the Journal die) to the founding of the Annals of Improbable Research.

Martin had a hand in starting the careers of many other science writers, columnists and editors. His greatest effects on the world, of course, came from his column in Scientific American (a column ostensibly about puzzles and games, but actually about nearly everything in science and math, and often about literature and about the difference between sense and nonsense), and from his many books, the most famous of which is The Annotated Alice (which inspired the creation of many other interestingly-annotated classic works).

Many, many people will sing Martin’s praises. James (the Amazing) Randi is among the first to react to the sad news.

Wikipedia’s biography is a good place to start exploring some of the many worlds that Martin influenced. And here’s a profile Scientific American did some years after Martin retired. I urge you to dip into some of his many books.

My own favorite of Martin’s works is the final column he wrote for Scientific American — a deadly, hilariously efficient dissection of a gold-plated piece of nonsense. That final column was called “The Laffer curve and other laughs in current economics” [Scientific American, December, 1981, vol. 245, pp. 18-31]. It drew wrathful, spittle-flecked letters from  people who bought their intellectual fashion items at The Emperor’s New Clothes shop. “No economist has the foggiest notion of what a Laffer curve really looks like except in the neighborhood of its endpoints,” the column says. One of that column’s lovely technical drawings is reproduced below (thanks to Wikipedia). That final column itself  [you can read it online] is reproduced in the book The Night Is Large, a collection of many of Martin’s best writings.

ADDITIONAL: Alex Bellos published his interview with Martin Gardner — it may be the last big interview Martin gave.