Eighteen years after the creator of the spiceless jalapeno pepper was awarded an Ig Nobel Prize, a different plant-breeding scientist has achieved spicelessness in a different variety of chile pepper, say reports.

Today, in 2017, NPR’s “The Salt” blog reports about the new, second-spiceless-pepper, achievement: 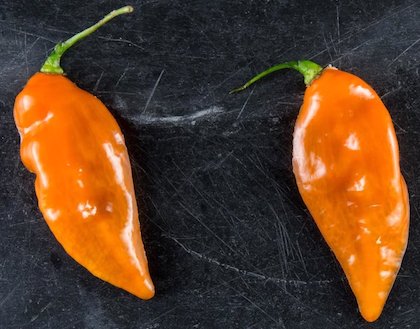 [A] pepper — an aromatic, orange habanero without any heat…

“We selected the habanero for heat because that’s what was coveted. But what if you wanted to experience the melon-like experience of a pepper?” Barber asks. “You can’t do it with a habanero — you can with a Habanada.”

Cornell plant breeder Michael Mazourek created the Habanada as part of his doctoral research. He got the idea after discovering a rogue heatless pepper whose genetics behaved very differently from a naturally sweet pepper like the Bell.

The man behind the Habanada is a Cornell University plant breeder named Michael Mazourek, who created it as part of his doctoral research….