Is it possible to build a sarcasm detector classification algorithm for Twitter tweets? This was the question facing Christine Liebrecht, Florian Kunneman and Antal van den Bosch at the Centre for Language Studies, Radboud University, Nijmegen, The Netherlands, in 2013. And the answer, in broad terms, was found to be ‘yes’ – in fact the team went as far as to say that their algorithmic solution was ‘perfect’ (#not).

“In this study we developed and tested a system that detects sarcastic tweets in a realistic sample of 3.3 million Dutch tweets posted on a single day, trained on a set of nearly 78 thousand tweets, harvested over time, marked by the hashmark #sarcasme by the senders. The classifier is able to correctly detect 101 of the 135 tweets among the 3.3 million that were explicitly marked with the hashtag, with the hashtag removed.” 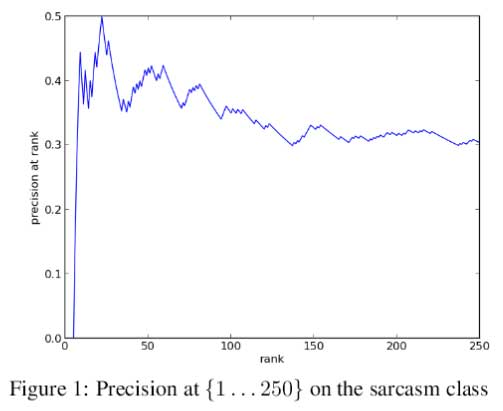 see: ‘The perfect solution for detecting sarcasm in tweets #not’ in: Proceedings of the 4th Workshop on Computational Approaches to Subjectivity, Sentiment and Social Media Analysis, pages 29–37, Atlanta, Georgia, 14 June 2013.