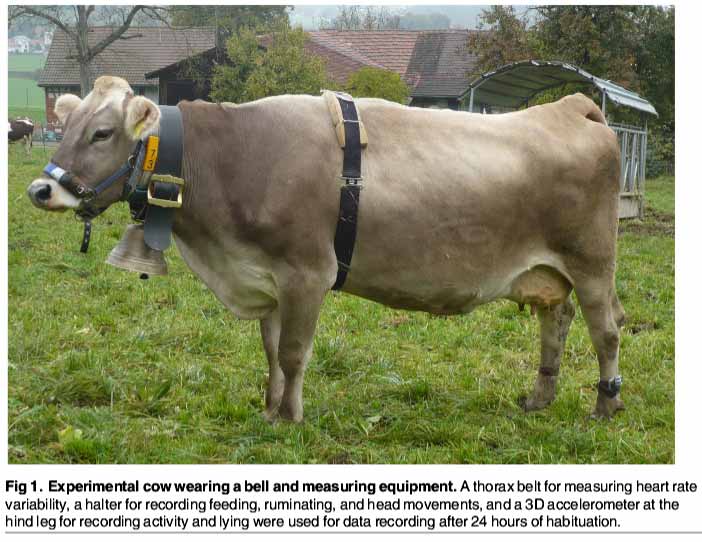 Although it’s traditional to fit such cows with bells, a question can, and indeed has, been asked : ‘Do Bells Affect Behaviour and Heart Rate Variability in Grazing Dairy Cows?’ Answers are provided in a 2015 PLoS ONE paper by Julia Johns, Antonia Patt, and Edna Hillmann of the Institute of Agricultural Sciences, Animal Behaviour, Health and Welfare Unit, Einheit für Ethologie und Tierwohl (ETH), Zürich, Switzerland, who performed a set of experiments :

The results of the experiments are summed up :

“Wearing a bell for 3 days interfered with feeding, ruminating and lying behaviours as well as head movements of cows compared with not wearing a bell, but it did not affect heart rate variability. Cows did not habituate to the bells over the 3 days of observation. The observed behavioural changes might challenge welfare if they lasted for an extended time period, but long-term observations are necessary to quantify the effects of bells on welfare.”

Bonus: The investigators provide a sound file [.wav format] of some cowbells in action.