What are the acoustics of breaking a bamboo chopstick?

According to a new paper by physicist Tzay-Ming Hong and his colleagues at National Tsing Hua University in Taiwan, it’s kind of like the acoustics of breaking a bundle spaghetti: they both apparently resemble the Gutenberg–Richter scaling law, which relates earthquake magnitude to the frequency of earthquakes with at least that magnitude. Similar relations hold for crackling noise in acoustic emissions from a variety of sources (e.g., fracturing rock, paper, and charcoal). So it’s not exactly the sound of the atom splitting (as far as we know), but it’s still rather impressive.

Here is an excerpt from the authors’ abstract:

By the use of a force-sensing detector, we establish a positive correlation between the statistics of sound intensity and the magnitude of a tremor. We also manage to derive these laws analytically without invoking the concept of a phase transition, self-organized criticality, or fractal. Our model is deterministic and relies on the existence of a structured cross section, either fibrous or layered. This success at explaining the power-law behavior supports the proposal that geometry is sometimes more important than mechanics.

Personally, I’m very pleased that the authors derived their results without having to invoke self-organized criticality. Here is the first figure from the authors’ paper. 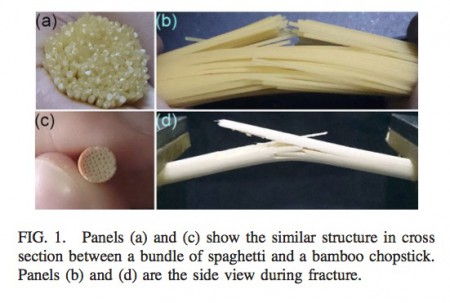