Iceland, though a small, physically isolated country, can boast of great Ig Nobelity. Ig Nobel Prizes, of course, are awarded for achievements that make people laugh, then think. 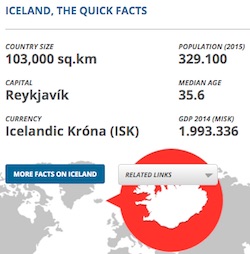 Iceland displayed panache in its Ig Nobellian displays of economics, and then government.

BANKS. The 2009 Ig Nobel Prize for economics was awarded to the directors, executives, and auditors of four Icelandic banks — Kaupthing Bank, Landsbanki, Glitnir Bank, and Central Bank of Iceland — for demonstrating that tiny banks can be rapidly transformed into huge banks, and vice versa — and for demonstrating that similar things can be done to an entire national economy. [For background, see the Report of the Special Investigation Commission, issued April 12, 2010.]

GOVERNMENT. Iceland also exhibits the spirit of the 2010 Ig Nobel Prize for management. A report by Flore Vasseur, for Backchannel, tells what Iceland did:

While the tiny country defies the markets, it ventures into an incredible political experiment: crowdsourcing its new constitution.

A group of 950 randomly selected citizens define the major guidelines that experts will use to draft 700 pages of recommendations. A constitutional assembly of 25 officials, lawyers, singers, househusbands, and people from all generations are elected to create the final text.

The whole country joins in the experiment. On the internet, everyone can share their views on the separation of powers, transparency, access to the internet, protection of natural resources. Each session of the constitutional assembly ends with a song. Four months later, the new constitution is adopted

That 2010 Ig Nobel prize was awarded to  Alessandro Pluchino, Andrea Rapisarda, and Cesare Garofalo of the University of Catania, Italy, for demonstrating mathematically that organizations would become more efficient if they promoted people at random. [Pluchino, Rapisarda, and Garofalo published a paper explaining their research: “The Peter Principle Revisited: A Computational Study,”published in the journal Physica A, vol. 389, no. 3, February 2010, pp. 467-72.]