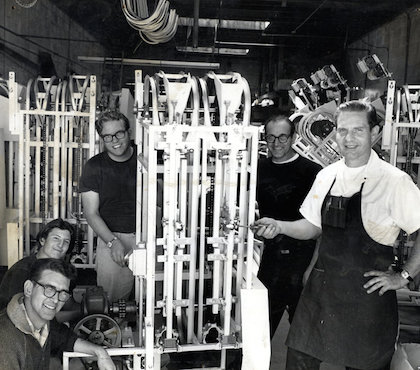 Daniel Thompson, who five decades ago automated the arcane art of bagel making, a development — seen variously as saving grace and sacrilege — that has sent billions of mass-produced bagels raining down on the American heartland, died on Sept. 3 in Rancho Mirage, Calif. He was 94. His family announced the death last week.

A California math teacher turned inventor, Mr. Thompson was a shaper of postwar suburban culture in more than one respect: He also created the first wheeled, folding Ping-Pong table, a fixture of American basements from the mid-20th century onward.

But it was for the bagel machine that Mr. Thompson remained best known. The invention changed the American diet…

Mr. Thompson obtained several patents, over a long span of years, for devices and methods for making bagels. His earliest, U.S. patent #2584514, was granted in 1952, for an “apparatus for making a toroid“. Here’s some detail from the patent: 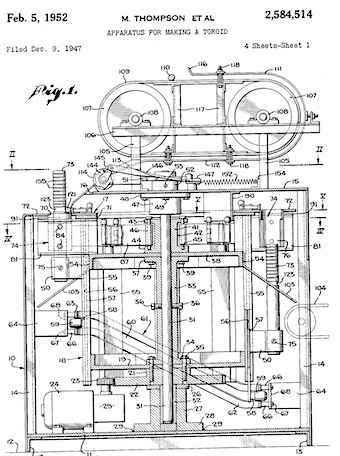 “This invention relates to apparatus for form ing plastic, deformable, pliant, compositions such as dough into the shape of a toroid. Machines have heretofore been provided for forming dough. into the shape of a toroid, such as doughnut machines. However, the dough of certain products, such as that known as bagels, is of such a heavy, tough, elastic consistency that it can not be handled on doughnut machines and it has heretofore been necessary to form the bagel dough by hand. The dough is first rolled into cylindrical form and turned about the fingers of the operator to form a toroid with the ends overlapping. Then the overlapping ends are hand rolled into pressed, meshing, consolidated, integral relation, forming the toroid. This manner of manually forming the dough into a toroid is not only slow and in eficient, but due to the rolling of the overlapping ends, the result is an irregular deformed toroid. It is, therefore, the primary object of this invention to provide apparatus for forming dough into circular toroid shape.”