Are there differences in the rapid-recognition (viz. 250 ms) of photos of men and women in swimsuits (or underwear) when they are presented upside-down? A 2011 paper in the prestige journal Psychological Science suggests the answer maybe yes. Inspired (in part) by a 1969 study from Dr. Robert K. Yin, which was entitled ‘Looking at upside-down faces’ (Journal of Experimental Psychology, 81, pp. 141–145) researchers at the Center for Social and Cultural Psychology, Université Libre de Bruxelles, Belgium and the Subtle Prejudice Lab, University of Nebraska–Lincoln, US, decided to test what they are calling the ‘Sexualized-Body-Inversion Hypothesis’. 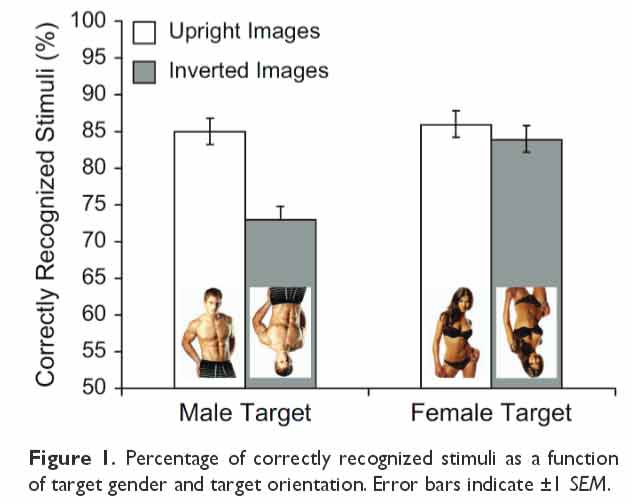 Seventy-eight university students (41 men, 37 women; mean age = 20.5 years, SD = 2.7 years) provided informed consent to participate in the study. We randomly presented 48 sexualized male and female photos to each participant. The stimulus set consisted of 24 photos of men and 24 of women, with 12 photos from each group inverted and 12 upright. In each photo, the target wore a swimsuit or underwear and had a neutral facial expression.

Also see: Recognitions – part 1 – Where is the nose?

Bonus: A recent twist on an old idea, not related in any scientific sense, though some might say there are partial similarities. Note that Wikipedia is apparently awaiting an entry for this cultural artefact, which has a history of at least 50 years – can anyone help us with its origin?