Gian-Carlo Rota explained, in 1997,  a difference between mathematicians and scientists: 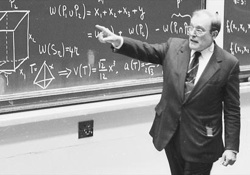 To a scientist, nature is a primeval forest to be explored, rich in surprising and unpredictable fauna, endowed with mysterious laws that scientists bravely wrest from the jungle. Once discovered, the laws of nature are written up by scientists for the benefit of posterity, in a language that sometimes – but not always – happens to be the language of mathematics. A scientist need not be fluent in that peculiar language that is called mathematics, just as he or she need not be fluent in Urdu or Gaelic.

Mathematicians do not agree with this view.