It’s a given that all manner of unwelcome microbial and viral particles can be exhaled by a person during a sneeze or a cough. Prompting inventor Joseph Apisa of Colts Neck, NJ, US, to create a ‘Sneeze catching method and apparatus’ It’s just received a US patent (Dec. 16, 2014). It can be, and indeed is, described in one sentence : 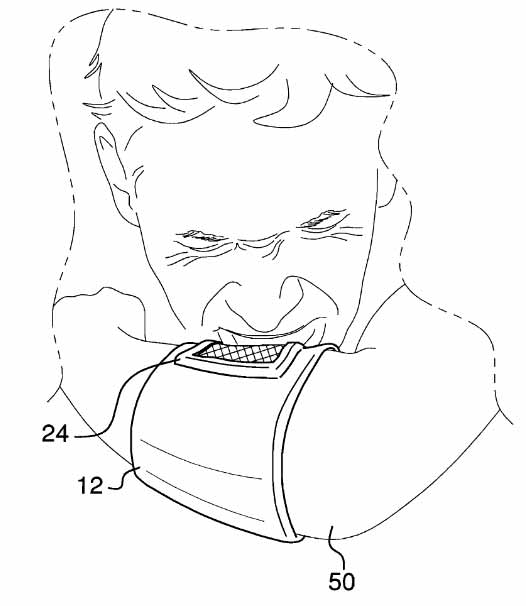 “An apparatus for catching bodily fluids ejected during a sneeze or cough, said apparatus comprising: a sleeve having a first open end, a second open end and a perimeter wall being attached to and extending between said first and second open ends; a frame being pivotally coupled to said perimeter wall, said frame having an exterior edge, an interior edge, an upper surface and a lower surface, said frame having an attached edge and a free edge positioned opposite of each other, said attached edge being attached to said perimeter wall, said frame being positioned in an open position having said free edge spaced from said sleeve or in a closed position having said free edge secured to said sleeve, said frame bounding a receiving space when said frame is in said closed position; a covering being attached to and being coextensive with said interior edge, said covering extending over said receiving space, said covering being comprised of an air and fluid permeable material; a closure being mounted on said sleeve and releasably retaining said frame in said closed position; a pad being removably positioned in said receiving space, said pad having anti-bacterial properties; and wherein said sleeve is configured to be worn on an arm of a person such that the person may sneeze or cough into said pad and that said pad captures and destroys bacteria exhaled by the person.“

Note re. Apostrophic Insufficiency: Improbable inquiries regarding the lack of apostrophe in Colts Neck have met with very little, if any, success. There are (unsubstantiated) rumours that apostrophes were long ago dropped at the insistence of nautical map-makers who felt that they could be mistaken for rocks (the apostrophes not the map-makers.)